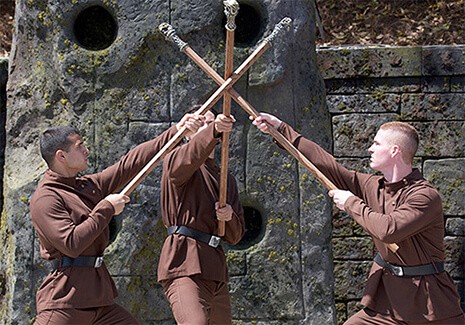 Universal Studios Hollywood is home to many iconic attractions, but perhaps nothing is more magical than the Wizarding World of Harry Potter.

Just recently, Universal reopened The Nighttime Lights on the Hogwarts Castle and there is plenty to see and enjoy while visiting the Wizarding World.

One of the most beloved entertainment shows at Universal Studios Hollywood is the Triwizard Spirit Rally, which features performances students from the legendary wizarding schools of Hogwarts, Beauxbatons, and Durmstrang.

Recently, a video has surfaced on social media of a person alleging to be a rejected dancer at Universal Studios Hollywood. During the show, we can see the person move to the front of the crowd and do a back flip.

The video came from Dylan Adler (@DylanAdler6) on Twitter.

I was rejected from being a dancer at universal studios so I came to watch their first show pic.twitter.com/mBjBCClaRq

A Spirited Show Of Support

Cheer on the colourful procession of students from the legendary wizarding schools of Hogwarts™, Beauxbatons, and Durmstrang as they lead the excitement for the Triwizard Tournament.

Universal Studios Hollywood is home to many other incredible attractions including DreamWorks Theatre Starring Kung Fu Panda, Harry Potter, and the Forbidden Journey, The Simpsons Ride, The Secret Life of Pets: Off The Leash, The World-Famous Studio Tour, WaterWorld, and much more.

In addition, Universal Studios Hollywood is putting the finishing touches on Super Nintendo World, which is set to open in 2023.

Do you enjoy the Triwizard Spirit Rally at Universal Studios Hollywood? Let us know in the comments.

If you want to visit Universal Orlando Resort, you can today! Click here to get your vacation started! You can go to Universal Studios Florida, Islands of Adventure, then eat some dinner and grab a drink at CityWalk. Want to take a splash? Volcano Bay is ready for you. With so many fun events like Mardi Gras, Halloween Horror Nights, and more, Universal will give you an action-packed adventure like you are in the movies! And, who could forget about the Wizarding World of ‘Harry Potter’! Universal is also in the midst of building its biggest theme park ever, the Epic Universe, which is set to open in 2025. Or, how about a trip to Universal Studios Hollywood to experience the movies? Or, how about a trip to Walt Disney World Resort or Disneyland Resort? No matter where you want to go, you’re sure to have a magical time!