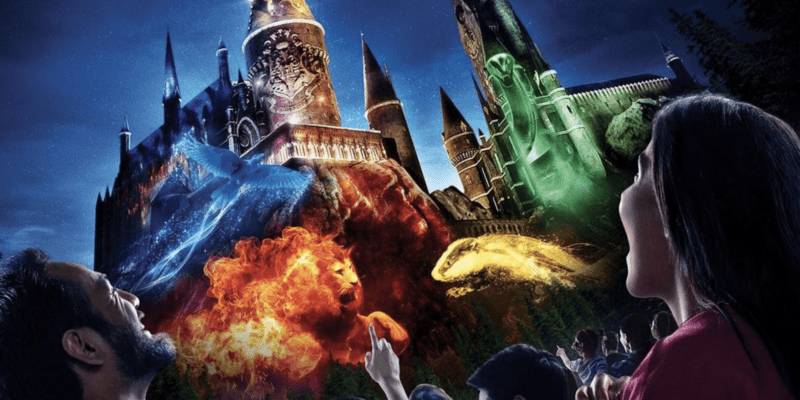 If you are a fan of the Wizarding World of Harry Potter, you have surely been to either Universal Orlando Resort or Universal Studios Hollywood. Both Universal Parks have added the J.K. Rowling created world in for Guests.

At both Islands of Adventure and Universal Studios Florida, Guests can enter a different part of the Harry Potter franchise and fall deep into the immersion that it encompasses. At Universal Studios, Guests can enter Diagon Alley! When you enter Diagon Alley, the space around you may seem quite tight, just as it was once described in J.K. Rowling’s books. Attractions like Harry Potter and the Forbidden Journey, Flight of the Hippogriff, Harry Potter and the Escape from Gringotts, the Hogwarts Express, and Hagrid’s Magical Creatures Motorbike Adventure pull the Wizarding World together.

Universal describes the show as:

Celebrate the four Hogwarts™ houses as they are brought to life in a stunning spectacle of dazzling lights and music when The Nighttime Lights at Hogwarts™ Castle returns for select dates. Watch in awe from Hogsmeade™ village as projections are cast against the majestic backdrop of Hogwarts™ castle inside The Wizarding World of Harry Potter™.

Since Universal Studios Hollywood does not have an evening show, it is a big deal that the Hogwarts castle show has been brought back to the park. Guests have often been stunned by the show, and now, can continue to do so.

What do you think of The Nighttime Lights at Hogwarts Castle? Let us know in the comments below.