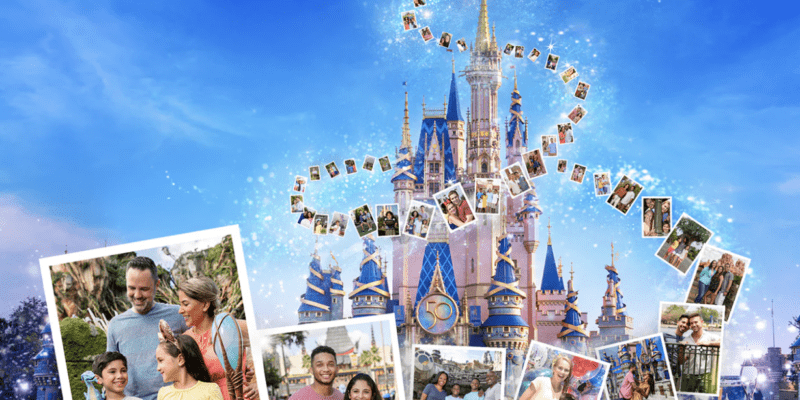 If you are a fan of Disney photos, Walt Disney World is now offering a very special PhotoPass offering with Cinderella Castle.

This new PhotoPass offering, available for the 50th anniversary will allow Guests to change Cinderella Castle into their vacation memory bank, selecting photos from their PhotoPass to take over the castle, placing them in various spots of the Magic Kingdom icon through the work of augmented reality, which we have seen Disney utilize on many occasions now with photo offerings, including the ability to change the 50th anniversary castle into the 25th anniversary cake castle!

Once you get started, the experience will prompt you to select a portrait-oriented Disney PhotoPass photo from your photo gallery within the My Disney Experience app. If you prefer not to use one of these photos, you can also choose from our collection of images featuring Disney icons and favorite characters.

This experience, available for $9.99, includes:

If you want to see a video on how the new photo experience will work within the My Disney Experience app, you can do so by clicking here. This offering is very unique as it allows you to curate your own photo memory wall on Cinderella Castle with photos you have already taken on your Disney World vacation. Personally, it reminds me of the old projection show, The Magic, the Memories and You. The show featured photographs and videos of park guests, taken by Disney’s PhotoPass employees, combined with projections of Disney characters and attractions and pre-selected music. It was played before and after Wishes fireworks show at Magic Kingdom!

What do you think of this new photo offering, would you pay $9.99 to use it?