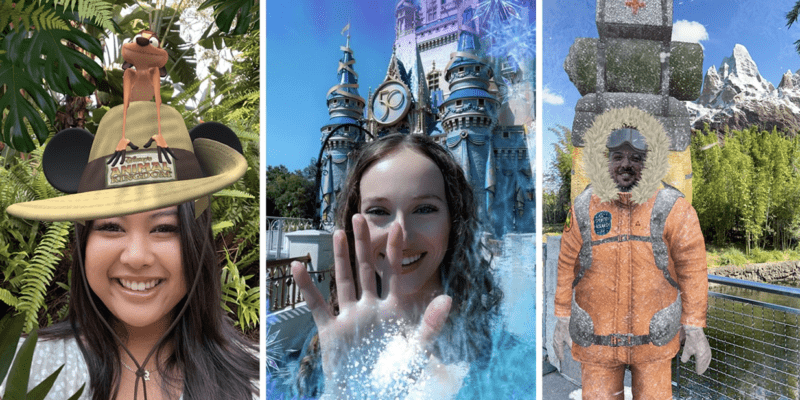 One of Disney’s most recent creations that debuted on the My Disney Experience is Disney Genie, a new way to plan your Disney to the maximum efficiency, according to Disney!

The app gives Guests in the Park suggestions on where they should head next based on location and wait times and also has the ability for Guests to purchase Disney Genie+, which gives them access to the majority of Lightning Lane attractions, as long as they book a time slot subject to availability. At Walt Disney World Resort, Guests must pay $15.00 per person per day to access Disney Genie+. Most attractions will be available for Guests to choose from; however, there are certainly more popular rides that have their own separate price if you would like to use that Lightning Lane, such as Rise of the Resistance in Star Wars: Galaxy’s Edge.

Now, a plus to having Disney Genie+ is that you will have access to Disney PhotoPass lenses on your phone! The add-on allows you to have free PhotoPass for the day at the Parks, as well as your own personal PhotoPass on your phone! We already reported on the original augmented reality lenses, which you can read more on here, but there are now new offerings.

Embrace your icy powers like Elsa, adopt a problem free philosophy with Timon, or bundle up and avoid the clutches of the Yeti, with new @DisneyPhotoPass Lenses! https://bit.ly/3ClIzQw

Embrace your icy powers like Elsa, adopt a problem free philosophy with Timon, or bundle up and avoid the clutches of the Yeti, with new @DisneyPhotoPass Lenses! https://t.co/edbtIVQkuK pic.twitter.com/7yxsF9lZGD

With the newest Lenses, you can embrace your icy powers like Elsa, adopt a problem free philosophy with Timon, bundle up and avoid the clutches of the Yeti, accessorize with themed glasses that reflect magical icons, and show off your sweet and salty sides!

While many Disney PhotoPass Lenses can be used across Walt Disney World Resort, others like the Timon and Expedition Everest Lenses will be available exclusively in specific areas of the parks.

To celebrate this launch, we met with a few of our Disney PhotoPass photographers to give them a first look. Our photographers capture magical moments for our guests every day, so we wanted to turn the camera lens on them. They got to spend some time enjoying our Lenses, including a sneak peek at the new ones – check it out!

Which lens is your favorite? Let us know in the comments below!