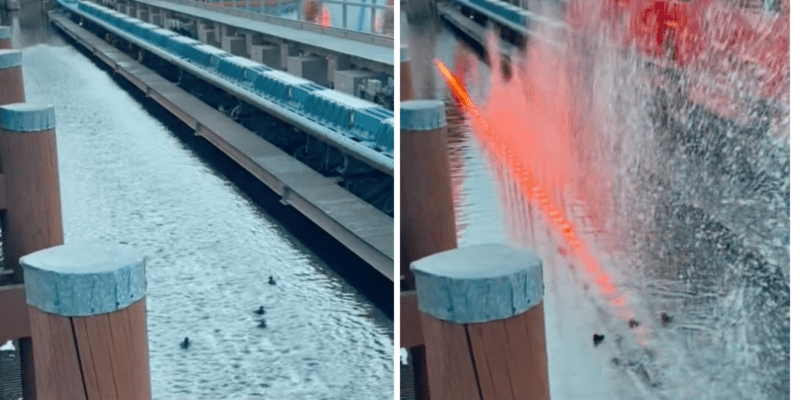 There’s so much to see and experience while visiting Walt Disney World Resort and Disneyland Resort.

Disney Park Guests visit for the attractions, but there is so much more to enjoy while heading to Magic Kingdom, Disney’s Animal Kingdom, Disney’s Hollywood Studios, EPCOT, Disneyland Park, or Disney California Adventure.

One feature that can be enjoyed at both Disney World and Disneyland is the Disney Ducks. Of course, we’re talking about animals who’ve decided to make the Disney Parks their home.

Lately, there have been some videos shared of Guests spotting baby ducks at Disneyland and it seems they’re not a huge fan one attraction at Disney California Adventure.

Momma duck was totally used to everything going on and was just hanging out, little ducklings were getting a lesson on Disney duck life 😂💛#disneyducks #disneytiktok #incredicoaster #disneyfamily#disneyparks #disneyrides

Momma duck was totally used to everything going on and was just hanging out, little ducklings were getting a lesson on Disney duck life 😂💛#disneyducks #disneytiktok #incredicoaster #disneyfamily #disneyparks #disneyrides

As you can see in the video, the ducks come out just as the coaster speeds passed and the water feature erupts. That leads to them swimming directly back under the track for comfort.

Of course, it won’t take long before these ducklings are completely and totally used to these Disney attractions, and seeing a large coaster pass by will become like second nature.

Do you love seeing the Disney ducks? Let us know in the comments!

Comments Off on Baby Ducks Terrified By Massive Disney Attraction