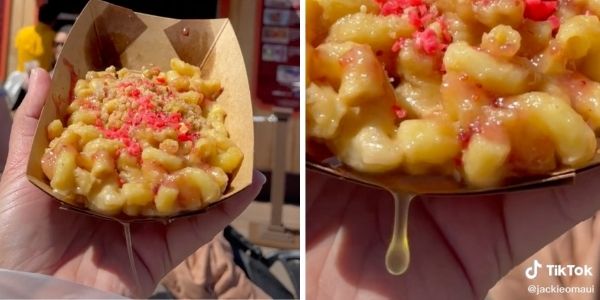 When visiting the Disney Parks, you’ll definitely not want to miss all of the unique and exciting food options.

From Mickey Bars and churros to turkey legs and Dole whips, all of the Disney Parks and Resorts have a wide selection that Guests can indulge from.

However, with so many options, there’s bound to be a few misses on the menu. Currently, fans are blowing up social media about one snack in particular at the Disneyland Resort in Southern California that was recently added.

Disneyland is currently hosting its Food & Wine Festival at Disney California Adventure, featuring exciting merchandise and food options for Guests to enjoy. One creation has been getting a lot of heat online however due to its weird and messy nature.

The snack is called the  Peanut Butter & Jelly Mac and comes with brown sugar streusel and strawberry crackle. Guests can find this snack at the Nuts About Cheese vendor in Disneyland California Adventure for $8.25, though we’re not sure we’re brave enough to try it.

A video uploaded to TikTok recently addressed this new snack, showing it in all of its glory(?) See the video below from

As you can see, the grease from the snack was absolutely dripping out of the tray, not making for a particularly appetizing first impression. Forgetting the grease, this snack is a combination of peanut butter, jelly, and mac & cheese which should be enough to ward off the less adventurous. Those who didn’t turn away at the first sight of this creation shared their thoughts on it in the comment section of the video. User @backing_troops_kh said:

What in the world were they thinking with this one. It looks like something buddy the elf would come up with

While weird, this may not even be the strangest food creation for this event. The Disney California Adventure Food & Wine Festival kicked off on March 4 and will run through April 26, 2022. Guests can purchase the Sip and Savor Pass which allows Guests to try up to eight different food and non-alcoholic beverage items at participating locations.

Have you tried this new food creation at Disneyland? Let us know what you thought of it in the comments below.