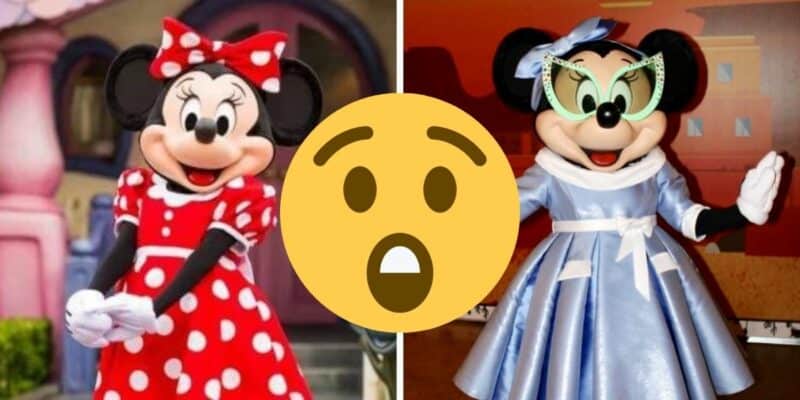 As reported a few weeks ago, in honor of Women’s History month, Minnie Mouse will debut a new signature look as she rocks a polka dot pantsuit. And on March 6, she officially ditched the dress and rocked her navy blue pantsuit at Disneyland Paris.

Now, just days after Minnie showed off her new outfit, she is premiering yet another new look!

Related: Did Disney Drop the Ball With Minnie’s New Look? Fans Speak Out

Disney’s Hotel Santa Fe channels the iconic sights of Route 66 and grabs inspiration from Disney-Pixar’s Cars franchise. To fit in with the theming, Minnie Mouse debuted her new Route 66 look, which fans are loving!

DLP Report was there on scene to check out her new outfit, whom shared photos and videos to Twitter:

In the photo below, you can see the gorgeous details in Minnie’s new outfit, including her aqua-teal colored glasses, complete with rhinestones:

It seems as though fans are loving this new look, compared to the recently debut pantsuit for Women’s History month. Disney fan Elizabeth replied to DLP Report asking for her glasses “in human form”:

I would like her glasses in human form, thanks

I would like her glasses in human form, thanks

And Ashleigh referred to Minnie as the Queen that she is:

We Stan a Queen

We Stan a Queen

At this time it seems Minnie’s new outfit can only be seen at Disney’s Hotel Santa Fe hotel as this coincides with the theming of the hotel. Minnie is still wearing her pantsuit when she greets Guests at Studio Theater in Disneyland Paris in honor of Women’s History month.

Are you loving Minnie’s new “Route 66” look? Let us know in the comments below.