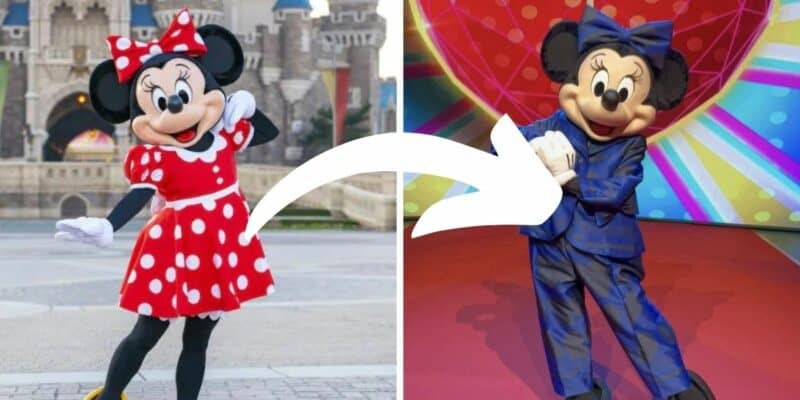 As reported a few weeks ago, in honor of Women’s History month, Minnie Mouse will debut a new signature look as she rocks a polka dot pantsuit.

And today is the day we get to finally see Minnie’s new pantsuit in person.

A few weeks ago, we reported that in honor of Women’s History Month, at Disneyland Paris, Minnie Mouse would ditch her iconic red polka dot dress and, instead, rock a navy blue polka dot pantsuit, designed by Stella McCartney.

And now, thanks to DLP Report on Twitter, we can see how amazing Minnie looks in new pantsuit. DLP Report shared:

📍Meet Minnie in her pantsuit designed by Stella McCartney starting today and until the end of the month at Studio Theater continuously from 1:10p (last set today at 7:05p)

📍Meet Minnie in her pantsuit designed by Stella McCartney starting today and until the end of the month at Studio Theater continuously from 1:10p (last set today at 7:05p) pic.twitter.com/r6ji9uweMt

DLP Report shared additional photos of Minnie, who is currently meeting Guests in her new pantsuit at Studio Theater. They write:

📍”Minnie Fashionista”, in her famous Stella McCartney pantsuit, is now meeting all Guests at Studio Theater:

Minnie Mouse can be seen in her new navy blue pantsuit at Walt Disney Studios Park at Disneyland Paris.

Disneyland Paris recently joined over 140 organizations and companies in signing the #StOpE charter, which sets specific priority actions to reduce sexism in the workplace.

Are you loving Minnie’s new pantsuit? Let us know in the comments below.