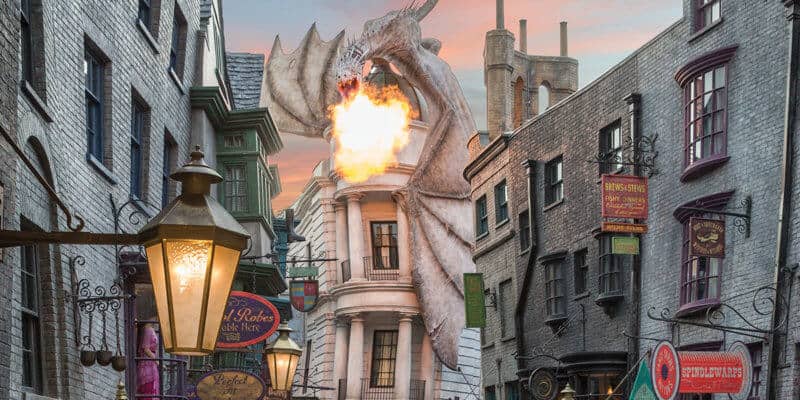 Universal Orlando Resort is home to the magical Wizarding World of Harry Potter.

No matter which Universal Park you visit, there is magic to experience in the Wizarding World.

Diagon Alley at Universal Studios Florida has Harry Potter and the Escape from Gringotts, as well as many unique experiences like Ollivanders Wand Shop and The Leaky Cauldron. Hogsmeade at Universal’s Islands of Adventure allows Guests to take in the magical sight of Hogwarts and enjoy rides like Harry Potter and the Forbidden Journey, Flight of the Hippogriff, and Hagrid’s Magical Creatures Motorbike Adventure.

While it is certainly a magical and immersive experience, that does not mean that the Wizarding World isn’t subject to the Florida weather.

Several videos went viral at Walt Disney World Resort this week during massive rainfalls. There was major flooding at Magic Kingdom, Disney’s Hollywood Studios, EPCOT, and Disney’s Animal Kingdom that made Guests look as if they were walking through a river at some points of the Disney Parks.

TikTok user @marcalania shared a video from the rainfall where they were standing inside a shop in Diagon Alley at Universal Studios Florida.

As you can see in the video, the rain had made its way even inside the shop, causing some issues for Guests as they sought shelter to stay dry, as well as for Universal Orlando in terms of taking care of its beloved experiences.

Islands of Adventure has some fantastic attractions, as well, like The Incredible Hulk Coaster, Doctor Doom’s Fearfall, The Amazing Adventures of Spider-Man, Jurassic Park River Adventure, the all-new Jurassic World Velocicoaster, Skull Island: Reign of Kong, Hagrid’s Magical Creatures Motorbike Adventure, Harry Potter and the Forbidden Journey, and more! Volcano Bay is also open for those who want to get their splash on, and at the moment, Epic Universe is under construction with a potential 2025 opening date. Epic Universe is set to be the largest Universal Park in the world when it opens.

Are you planning to visit Universal Orlando Resort soon? Let us know in the comments.