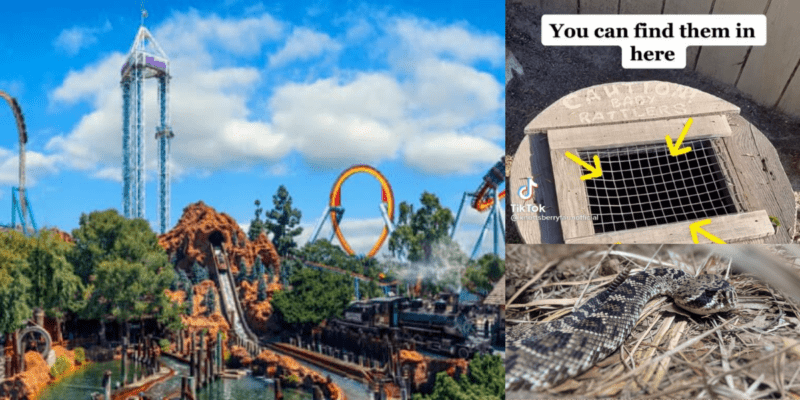 Knott’s Berry Farm has been targeted over possible cases of animal mistreatment in the past. Considering the Park has a couple of facilities where live animals live and interact with Guests, it is understandable they show concern for their well-being and proper living conditions.

However, a recent video on TikTok showed a chilling situation that could make Guests fear for their own safety the next time they visit the parks.

The video shows the Boot Hill Diggins area, where the Park keeps baby rattlers in a small open cage, from which they could easily escape, potentially putting Guests at risk.

Or at least they would, if they weren’t a bunch of baby rattler toys. The TikTok was posted by Knott’s Berry Farms (@knottsberryfarmofficial) themselves, showcasing the humor sprinkled around the Park.

Check out the video down below!

You can watch Knott’s first post on TikTok down below:

And if Guests are visiting with small kids or just aren’t crazy over thrills, they can also have a great day at the Park, as they can interact with the Peanuts Gang at Camp Snoopy, or ride some of the more family-friendly attractions. Some examples of these last are Balloon Race, Calico Mine Ride, Calico Railroad, Camp Bus, Charlie Brown’s Kite Flyer, Dragon Swing, Flying Ace, Grand Sierra Railroad, Hat Dance, High Sierra Ferris Wheel, Huff and Puff, Knott’s Bear-y Tales: Return to the Fair, Linus Launcher, Merry Go Round, Pig Pen’s Mud Buggies and Woodstock’s Airmail.

With Disneyland Resort being so close, one could assume there was a great rivalry between the Parks and their owners, but ironically, Walt Disney and Walter Knott, Knott’s founder, were great friends. Disney took a lot of Knott’s influence with him when building Disneyland and had a lot of help from his theme Park neighbor, who had over 30 years of expertise at the time. In the 1990’s Disney even tried to purchase the theme Park, but the sale never came to fruition. Now, the Park still remains highly successful under the Cedar Fair ownership.

Have you ever visited Knott’s Berry Farm? Let us know in the comments!