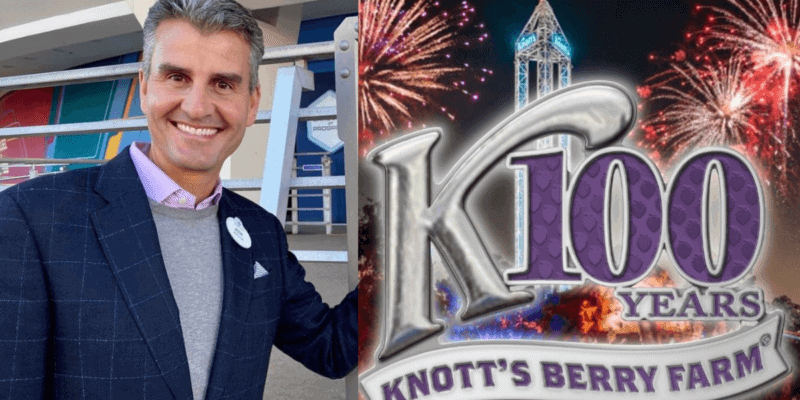 The Chairman of Disney Parks, Experiences and Products, Josh D’Amaro has been spotted in a theme park again. This is not unusual for the Disney executive, as he is known to visit Disney Parks quite often. However, this week D’Amaro was spotted at a different theme park: Knott’s Berry Farm.

Buena Park’s Knott’s Berry Farm is about to celebrate a huge milestone for their theme park. Also known as Southern California’s Original Theme Park, Knott’s is on the cusp of its 100th anniversary celebration! This summer-long celebration will be taking place from May 21 through September 6 of this year. The Knott’s website describes the event as follows:

Southern California’s original theme park, Knott’s Berry Farm, commemorates its 100-year anniversary with a grand summer-long anniversary celebration paying tribute to the Knott family’s rich history and legacy of family fun for all. “The Knott’s Family Reunion” is a chance for friends and families to come together to relive their favorite Knott’s remembrances while also creating unforgettable, exciting new memories. Guests will be immersed in a once-in-a-lifetime anniversary celebration featuring festive park décor, themed food items, unique entertainment, exclusive merchandise, and special surprises along the way, all paying homage to the nostalgia that surrounds the historic theme park.

On the eve of this celebration, Disney executive Josh D’Amaro made sure he was in attendance. Not only was he there to join in on the festivities, but he also wanted to offer his congratulations.

In his most recent post on Instagram, D’Amaro congratulated his friend and Vice President/General Manager of Knott’s Berry Farm, Jon Storbeck, saying:

Congratulations to my friend Jon Storbeck and the entire team at Knott’s Berry Farm for their 100th Anniversary! I was very touched to be invited to the preview party for your celebration last night! It was great to see you!

We love to see this kind of comradery and good spirit toward other theme parks and their successes!

What do you think of Josh D’Amaro celebrating Knott’s and their 100th anniversary? Let us know in the comments!

Planning a visit to a Disney Park or Knott’s Berry Farm? Let Academy Travel help you with all of your vacation planning needs!