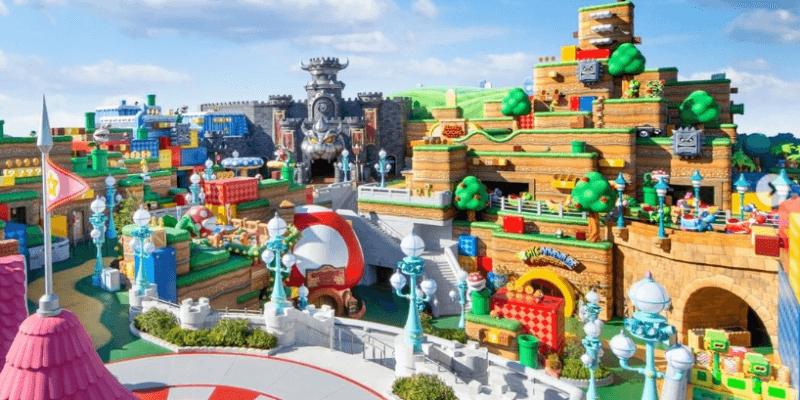 One of the most anticipated theme Park projects currently is the exciting new Epic Universe addition coming to Universal Studios in Orlando, Florida.

Epic Universe is set to be the largest Universal Park in the U.S., featuring tons of rides, attractions, and experiences that will be sure to provide a ton of fun. Not much is known about the Park but early reports and patents indicate incorporating the classic Universal Monster series as well as the expansion known as Super Nintendo World which opened in Universal Studios Japan last year to resounding success.

A Wizarding World of Harry Potter section is also being rumored with a Fantastic Beasts spin to it. The Park’s construction was put on hold last year but it appears progress is quickly being made again with a 2025 opening date announced by Universal.

And speaking of Super Nintendo World, progress is already being made on the colorful new land at the Epic Universe construction site. We recently covered progress on the land, but now we have some exciting pictures of the Mario-centric area. It should be known that Super Nintendo World is the only confirmed land in Epic Universe at the moment, so seeing the theme park start to construct the video game world is a major accomplishment.

In foreground of this aerial is Mario Cart site. Top right is site of Yoshi’s Adventure. Both are in Super Nintendo World at Epic Universe.

In foreground of this aerial is Mario Cart site. Top right is site of Yoshi's Adventure. Both are in Super Nintendo World at Epic Universe. pic.twitter.com/xcSu5AVHfl

As you can see, while the pictures may just look like a pile of dirt, work is well underway for this exciting new land. We couldn’t be more excited for Super Nintendo World to open along with Epic Universe. While no official release date has been confirmed, we do know the general timeframe the Park should be completed.

Explore the world of Mario!

SUPER NINTENDO WORLD is full of iconic elements straight from Mushroom Kingdom! Immerse yourself in the exciting world of Mario

Hop on Yoshi for an adorable adventure!

Hang on to Yoshi as you search for Captain Toad on a treasure hunt! Use the Captain’s map to find 3 mysterious eggs! Get a spectacular view of the Mushroom Kingdom from Mount Beanpole while having fun on this ride that’s perfect for the whole family.

Aside from Orlando and Japan, Universal Hollywood is also building a Super Nintendo World which will be located on the first floor of the Park. Although an opening date has yet to be announced, it is being rumored that the end of the year could be a great time to visit the Park.

Are you excited for Epic Universe to open? Let us know in the comments below.