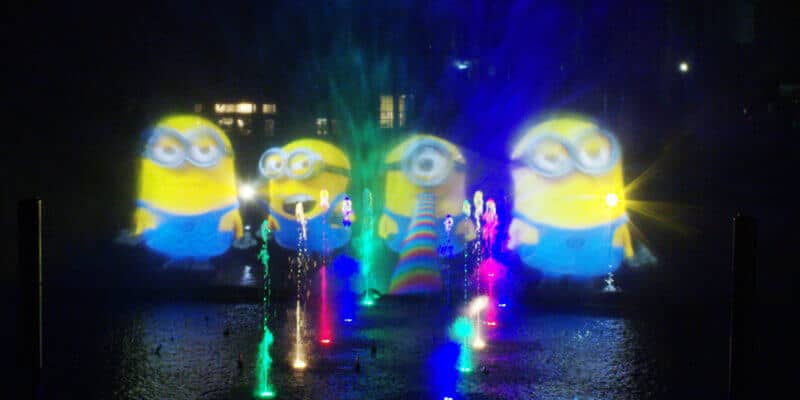 Universal Orlando Resort may not be known for its nighttime spectaculars like Walt Disney World Resort, but that does not mean it doesn’t have some incredible offerings.

One of those unique experiences in Universal Orlando’s Cinematic Celebration.

Universal’s Cinematic Celebration takes place on select nights at Universal Studios Florida. It can be seen on the Lagoon in the middle of the Park and projections take place at areas all across the Park. The nighttime show allows Guests to immerse themselves in epic movies like Jurassic World, Fast & Furious, and Despicable Me.

Unfortunately, the popular nighttime entertainment has been closed during the Mardi Gras celebration season and there is no indication on when it might return to its more regular schedule.

However, Twitter account @bioreconstruct recently shared a photo where we can see that the water levels have been lowered as the attraction undergoes maintenance.

This would point to the show not returning until the water levels are refilled, but nothing has been confirmed  by Universal Orlando at this point.

Epic Cinema Under the Stars.

This epic show lights up select nights with a celebration of music, water and light that takes you into the movies like never before. You’ll see and hear roaring dinosaurs from Jurassic World, feel the adrenaline rush of high-speed cars from Fast & Furious, watch the mischievous antics of the Minions from Illumination’s Despicable Me, and so much more.

Universal Orlando Resort is full of fun experiences and thrilling attractions that you can’t miss. Hollywood Rip Ride Rockit, MEN IN BLACK Alien Attack, Transformers: The Ride, Despicable Me: Minion Mayhem, E.T. Adventure Ride, and more can all be found at Universal Studios Florida. Islands of Adventure has some fantastic attractions, as well, like The Incredible Hulk Coaster, Doctor Doom’s Fearfall, The Amazing Adventures of Spider-Man, Jurassic Park River Adventure, the all-new Jurassic World Velocicoaster, Skull Island: Reign of Kong and more! Volcano Bay is also open for those who want to get their splash on, and at the moment, Epic Universe is under construction with a potential 2025 opening date.

Do you use Prime Parking when visiting Universal Orlando Resort? Let us know in the comments.