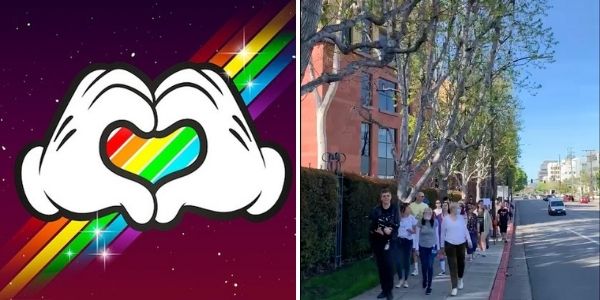 The backlash and controversy surrounding The Walt Disney Company after its rather lackluster stance on a new piece of Florida legislation is finally coming to a head, with a massive company-wide walkout taking place right now.

Today is one of the biggest days in Disney Parks and Disney Company news, with the controversy and backlash surrounding the company’s response to Florida’s “Don’t Say Gay” leading a company-wide walkout happening right now.

This walkout comes at the end of a vicious news cycle which involved the Walt Disney Company receiving near-constant negative press and heavy criticism. The company failed to denounce the new piece of legislation in a satisfactory manner for lots of Disney fans and employees alike, alienating them from the higher-ups. And speaking of higher-ups, to many, these issues can be attributed to Disney CEO Bob Chapek, as he failed to make a statement about the bill until it was too late.

Now, in Burbank, California, the walkout is happening with employees marching by the hundreds. See the walkout in action in the video from CNBC Field Producer Steve Desaulniers (@steve_desaul):

Hundreds of Disney employees walking out at company HQ in Burbank #DisneyWalkout pic.twitter.com/n9QpNmAHIf

The walkout takes place weeks after Disney failed to act in a satisfactory manner to the majority of the Disney community in response to Florida’s “Don’t Say Gay” bill. While not officially labeled “Don’t Say Gay”, this piece of legislation is as simple as the title given to it. As stated by NPR, “The legislation prohibits any instruction about sexuality or gender between kindergarten and third grade, or in a manner that is not age-appropriate or developmentally appropriate for students in accordance with state standards.”

We reported earlier today that Cast Members were allegedly instructed not to wear anything pride or trans-related, seemingly backtracking on Disney’s supposed progressiveness. It is uncertain what moves the company and employees will take next.

How do you feel about Disneys’s response to Florida’s new bill? Let us know in the comments below.