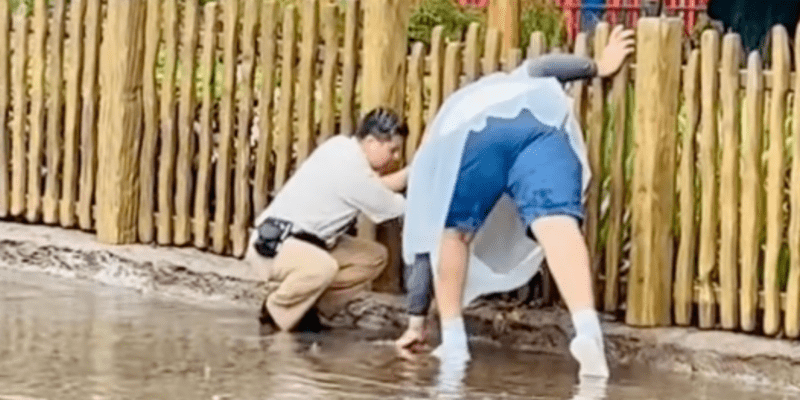 Walt Disney World Resort is home to many magical experiences.

From nighttime spectaculars like Disney Enchantment to special parades like Festival of Fantasy to beloved entertainments and, of course, all the attractions, there is something for everyone at Disney World.

While they often aren’t given the credit they deserve, it’s the Disney World Cast Members who help to ensure that the magic never stops. They work behind the scenes to make sure everything goes as planned and help to make sure that Guests are given the best experience possible no matter if they’re at Disney Park, Disney Resort Hotel, or visiting Disney Springs.

During the recent flooding that affected all four Disney Parks– Magic Kingdom, Disney’s Hollywood Studios, EPCOT, and Disney’s Animal Kingdom– TikTok user @itsnadineramos posted a video that showed a different side than what we typically see in Guest and Cast Member interactions.

As you can see in the video above, massive flooding had started in the streets of Magic Kingdom. A Disney Cast Member was already working above and beyond to help unclog a drain. A Disney Guest saw the Cast Member struggling to get the drain unclogged and decided to help out.

The two worked together to free the drain and allow water to flow again.

What do you think of this Guest helping the Disney Cast Member? Let us know in the comments below!

Let the expert team at Academy Travel help you plan your next magical vacation to Disney World’s water parks, four theme parks — Magic Kingdom, EPCOT, Disney’s Animal Kingdom, and Disney’s Hollywood Studios — and the Disney Springs shopping and dining district! Or, how about a trip to Disneyland Resort to experience Disneyland Park and Disney California Adventure, as well as the Disney Spring shopping and dining district.