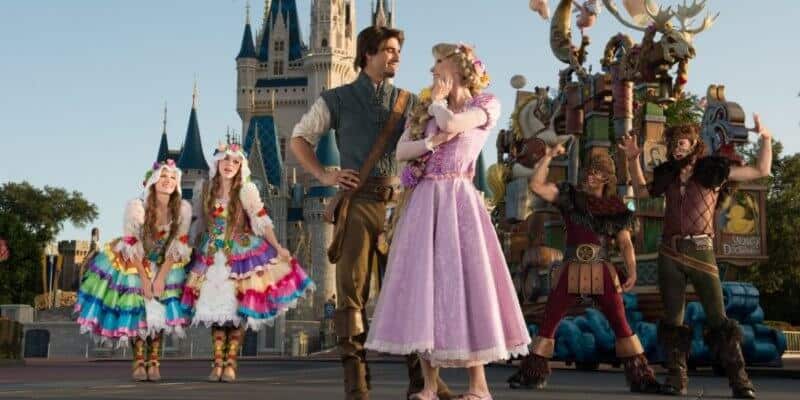 Just yesterday, we saw Disney’s Festival of Fantasy parade return to Magic Kingdom after nearly two years of silence. Finally, Guests got to see the streets of Main Street, U.S.A, Frontierland, Adventureland, and more light up with Magic as the Tangled, Peter Pan, and The Little Mermaid sections, and more were back in action.

That being said, the show did come with a few changes. Due to what seems to be budget cuts and possible safety measures, there are far less performers in the parade than Guests may be used to. These cuts have included numerous both performers and characters that used to dance through the streets while interacting with Guests, giving their individualized moments of magic. We also noticed that the Brave float seemed to be non-existent, which was a sad loss for many fans.

As well, the “Zip-a-Dee-Doo-Dah” reference has been cut from the show. Right as Donald Duck approaches on his float, you can hear the “Mickey Mouse March”, which used to turn into “Zip-A-Dee-Doo-Dah”, but that no longer occurs and instead, it is replaced with music. This change does coincide with a lot of the ongoing changes we are seeing with the Song of the South IP at Walt Disney World, as we know Splash Mountain is going to be rethemed to Princess and the Frog in the future.

Although Guests are happy to see Disney finally bring entertainment back to Magic Kingdom with both Festival of Fantasy and Mickey’s Magical Friendship Faire, some are sad to see their favorite parade undergo so many cutbacks. On Reddit, one Disney fan seemed to have watched a live stream of the parade as it debuted yesterday and is now debating canceling their Disney vacation altogether. The user said, “What was that? So far for the 50th anniversary we have a worse firework show, no Fantasmic, and a completely gutted parade that is missing so many elements that it had two years prior. We are booked to go in May, but actually debating canceling. The value for money is completely gone at this point.”

Fantasmic will return in 2022, however, we do not yet have an opening date for the show, but Guests need not worry if that evening performance will return. That being said, we can clearly see this Guest was disappointed by the show changes. We had a few readers also disappointed by the removal of “Zip-A-Dee-Doo-Dah”. Meg commented on our article indicating it was gone and said, “It is the ring tone on my iPhone. I also have the dvd which I purchased from Europe. Always loved this movie and I don’t see anything negative about it.” Although Meg expressed adoration for the film, many were solely sad to see the song go due to the cheerful nature of it.

Phil responded, “You are correct, no bad language, racial terms just a fun song. Wait, let’s change history and have everyone (including nations) hold hands, smile and skip. I was taught if you did learn from it, you are bound to repeat it.” That being said, again, it does make sense that the song would be removed due to Disney’s push towards a more inclusive Park, which means no racially charged IPs being present.

Megan Leila; (@meganspavilion) took to Twitter to comment on the missing Brave section of the show, as well as the parade itself.

the brave unit in festival of fantasy truly deserved better. actually, the entire parade deserves better as well as all of the performers…

actually, the entire parade deserves better as well as all of the performers…

It seems clear that the constant cuts that many are seeing with entertainment returning to Disney World, although presented as a safety concern for Cast Members, are still questionable to Guests as the Park is not following social distancing protocols anywhere else at this point, and mask mandates have been removed for fully vaccinated Guests.

That being said, I, for one, am happy to see the show back in any capacity!

What do you think about the return of the Festival of Fantasy?