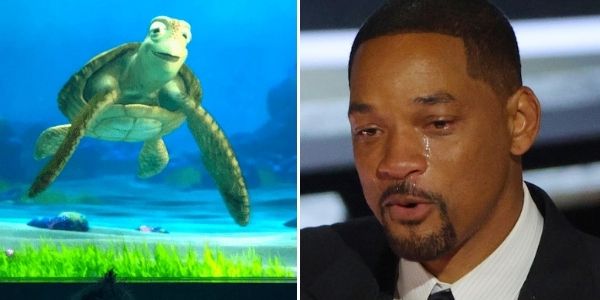 In case you were unaware, at the most recent Oscars award show, Will Smith stepped on stage and slapped Chris Rock after the comedian insulted his wife during a joke. The slap was heard around the world, and under the sea, apparently.

Sunday Night’s Oscars were nothing short of captivating. While plenty of awards were given out, nothing was more monumental or jaw-dropping than what transpired between host Chris Rock and Will Smith center stage (literally).

Since that night, the entirety of social media has been discussing what exactly happened on stage between the two legendary stars. Many celebrities have chimed in with their own thoughts on the situation and recently, one beloved Disney character also weighed in on this predicament.

One Guest recently asked how Crush from Finding Nemo (2003), felt about what happened between Will Smith and Chris Rock, which you can see in a video below courtesy of cal (@calvywalvy):

As you can see, the Guest was at one of the showings for Turtle Talk with Crush when they asked the 150-year-old sea turtle what he thought about Will Smith hitting Chris Rock at the Oscars the other night. Crush responded with “sounds violent”, later adding that the situation was “no bueno”.

For those who may not know, Turtle Talk with Crush is a fun and hilarious interactive show which has the popular character from Finding Nemo, talking and joking with Guests in real-time. The attraction can be found at both Walt Disney World in EPCOT as well as at Disneyland Resort in Disneyland California Adventure.

Shoot the Breeze Under the Seas

Do you enjoy Turtle Talk With Crush? What’s your favorite attraction at EPCOT?