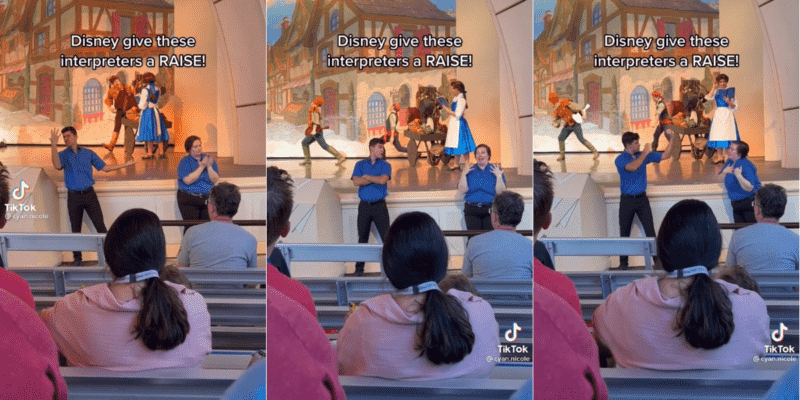 Cast Members are a vital part of The Walt Disney Company to make everything in the Parks run smoothly, from food and merchandise to security, upkeeping of the Parks, and even character interactions. They often go the extra mile to make every visit a memorable experience for Guests, and by doing so, they can sometimes steal the spotlight from the beloved Disney characters.

In a recent video posted by cyan nicole (@cyan.nicole) on TikTok, we can see a great example of these situations as we see a pair of Cast Members in charge of the interpretation of the Beauty & The Beast Live on Stage show at Disney’s Hollywood Studios steal the show with their performance.

Not only did they provide access to the show for the Deaf community by interpreting all the dialogues in American Sign Language, but they also shared an unmatched energy while doing it so.

Viewers quickly commented on how these Cast Members were performing the most demanding job since they had to memorize the entire script of the show and not only one set of lines, translate and interpret it in ASL, and do all of this in costume. Others commented they’ve seen these Cast Members perform at other shows, and they blow Guests away every time.

While these Cast Members have the specific role of interpreter, some others around the Park are also trained in ASL, creating even more magical experiences for Guests who are part of the Deaf community.

As things continue getting back to normal at Disney Parks, it is heartwarming to see Cast Members continue to spread Disney magic in all sorts of creative ways.