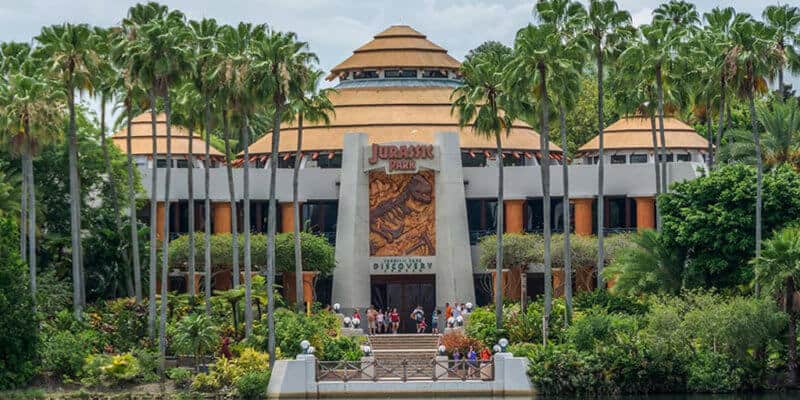 If you’re wanting to take a trip to a time before man when dinosaurs walked the earth, then Universal Orlando Resort is the place for you.

At Universal’s Islands of Adventure, there is an entire dedicated island to Jurassic Park where Guests are able to experience incredible attractions and unique encounters.

Jurassic Park River Adventure, the all-new Jurassic World Velocicoaster, and Pteranodon Flyers are the three rides in this area, but there is more to it than just rides. Camp Jurassic allows Guests to explore uniquely-themed caves, paths, and climb nets while the Discovery Center also has fun experiences, including meeting baby dinosaurs as they hatch. Finally, there are games, food, and did we mention an encounter with a live raptor?

Michael Carelli (@MichaelCarelli) recently posted a photo of a new collection item that currently can only be found in Jurassic Park at Universal’s Islands of Adventure.

You can now get your own custom #JurassicWorld employee ID badge in the lower level of the Jurassic Park Discovery Center at Islands Of Adventure —There’s 3 to collect!

You can now get your own custom #JurassicWorld employee ID badge in the lower level of the Jurassic Park Discovery Center at Islands Of Adventure —There’s 3 to collect! #JurassicWorldDominion #UniversalOrlando pic.twitter.com/voqrSuXKtT

In the Discovery Center, Guests can now create their own customizable Jurassic World employee badge and there are three to collect!

Outside of Jurassic Park, there is plenty more for Universal Orlando Resort Guests to see and experience. Hollywood Rip Ride Rockit, MEN IN BLACK Alien Attack, Transformers: The Ride, Despicable Me: Minion Mayhem, E.T. Adventure Ride, and more can all be found at Universal Studios Florida. Islands of Adventure has some fantastic attractions, as well, like The Incredible Hulk Coaster, Doctor Doom’s Fearfall, The Amazing Adventures of Spider-Man, Skull Island: Reign of Kong and more!

And, who could forget about the magical Wizarding World of Harry Potter located at both Universal Parks? Visit Diagon Alley in the Wizarding World of Harry Potter, where you can venture into Gringotts at Universal Studios Florida and go on a ride of a lifetime at Harry Potter and the Forbidden Journey and Hagrid’s Magical Creatures Motorbike Adventure at Hogsmeade in Islands of Adventure. Volcano Bay is also open for those who want to get their splash on, and at the moment, Epic Universe is under construction with a potential 2025 opening date.

Do you love Jurassic Park at Universal Orlando Resort?