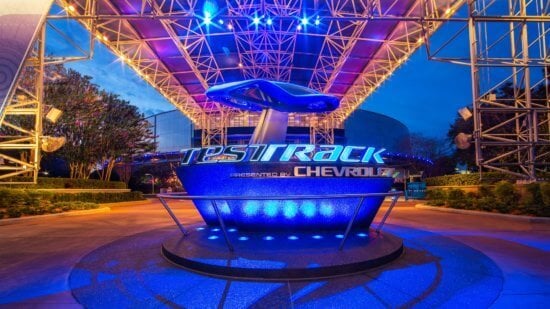 A popular attraction at Walt Disney World Resort is set to close a little early today.

According to the My Disney Experience App, Test Track is set to close at 6:30 p.m. tonight, though EPCOT does not close until 9:00 p.m.

While Disney has not given an official reason for the closure, the assumption is that this is for regular maintenance and the Disney website notes that the attraction will reopen tomorrow morning. It is not out of the ordinary to occasionally see an attraction close early at any of the Disney Parks, including Magic Kingdom, Disney’s Animal Kingdom, and Disney’s Hollywood Studios as well. This is the second-straight day that Test Track has closed before the Park has closed.

Cruise over to the gleaming Chevrolet Design Center to create your own virtual concept car. When you’re done, buckle up in a 6-passenger “SIM Car” and take it for an exhilarating spin on the test track. Rev through rough terrain and obstacles along the winding circuit. Accelerate through straightaways, maneuver switchbacks through inclement weather, hug curves banked at 50-degree angles and scale hills up to 3 stories high.

Even with Test Track closed for a couple of hours tonight, there is still plenty for Guests visiting the Disney Park to experience. EPCOT is home to many world-class attractions including Soarin’ Around the World, Living with the Land, The World Showcase, Gran Fiesta Tour Starring The Three Caballeros, Journey Into Imagination with Figment, Remy’s Ratatouille Adventure, Mission: SPACE, The Seas with Nemo & Friends, Spaceship Earth, and much more.

EPCOT is also expected to open the all new Guardians of the Galaxy: Cosmic Rewind roller coaster later this year.

What do you think of Test Track’s closure? Let us know in the comments.