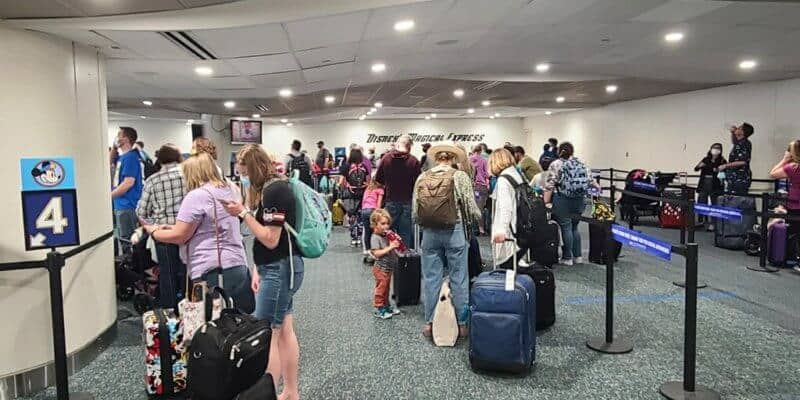 As air rage continues, dozens of airline passengers were arrested for disorderly conduct and violent behavior at Orlando International Airport during the ongoing COVID-19 pandemic.

According to Click Orlando, records show that Orlando police had to take dozens of travelers into custody for alleged crimes, including battering airline employees, fighting with other passengers in the gate area, throwing food at staff members and attempting to board planes after being denied access due to being intoxicated or behaving inappropriately.

According to The Federal Aviation Administration, 5,981 reports of unruly passengers came in last year, which is a significant increase from only 146 complaints in 2019, which was prior to the ongoing pandemic.

We do want to note that incidents occurring on airport grounds are separate from those while aboard an aircraft.

“Air rage is nothing new. But what we saw in 2021 was off the charts,” said Taylor Garland, a spokesperson for the Association of Flight Attendants–CWA. “This is not something we’re willing to accept.”

After the ongoing pandemic hit the United States in 2020, many airlines and airports put in new safety protocols to stay in line with the current CDC recommendations and the federal mandate. One of those protocols includes wearing a proper face covering while inside the airport and while aboard the aircraft.  It seems that the mask wearing has caused a lot of air rage, according to airline members.

“It’s happening here in Orlando, the ‘House of Mouse’ where everybody comes to vacation. I’ve got all these families and all these children on board, and the next thing you know, someone’s arguing and cussing. All over a mask.”

Amirzadeh went on to explain that some of her co-workers have even been physically attacked. She told Click Orlando:

“There are flight attendants that are being spit on, that are being grabbed or touched inappropriately. I personally know gate agents (who have been) punched so bad that they had to be removed and taken to the hospital with a knot on the side of their head.”

The Orlando Police Department responds to the incidents that occur inside Orlando International Airport or while an aircraft is parked at a gate. Orlando Police Deputy Chief James Young explained, “When a passenger becomes unruly on the ground, it could jeopardize the entire flight, and it could jeopardize an entire airport system and how it operates.”

“Our officers do a great job at trying to de-escalate these situations as much as possible when they arrive on scene. But sometimes, you’ll still see the passenger still very irate, still very upset. At a certain point, (the officers) are going to have to take action. In some cases, the individuals are arrested because of criminal allegations.”

Face masks are not the only issue or reason as to why there was an increase in air rage this last year, according to the Association of Flight Attendants-CWA.

“Traveling is incredibly stressful, especially during a continuous pandemic,” Garland said. “Passengers who are already agitated go to a ‘level 10′ much quicker and are much more violent than they have ever been before.”

The union believes that increased alcohol sales at many airports and the availability of to-go drinks have played a major impact on air rage and these incidents.

“Passengers are able to order alcohol to the gate and can drink right up until they board that plane,” said Garland. “The drunker a passenger gets, the less willing they’re going to be to comply with crew member instructions.”

When the pandemic began, most airlines suspended alcohol sales during flights. However, as the world continues to move forward amidst the ongoing pandemic, many have since resumed the service.

Many of the passengers who were arrested have since admitted to being under the influence, which they say play a part in their behavior. “I’m (expletive) up, I know. I’ve drunk too much,” William Kashner told Orlando police after he allegedly pushed and chest-bumped a gate agent in November.

And Hayley Agueda was accused of hitting an Orlando airline employee in the jaw as the worker attempted to remove her from the plane for yelling and cursing in June 2021. According to court records, she later pleaded no contest to misdemeanor battery and was sentenced to the two days she previously served in jail and six months of probation. She was also required to take an anger management course.

“I guess I’m sorry. I was kind of intoxicated,” Agueda told News 6.

According to court records, a large percentage of the passengers arrested at Orlando International Airport in 2021 were charged with misdemeanor offenses, which carry maximum penalties of one year or less in jail.