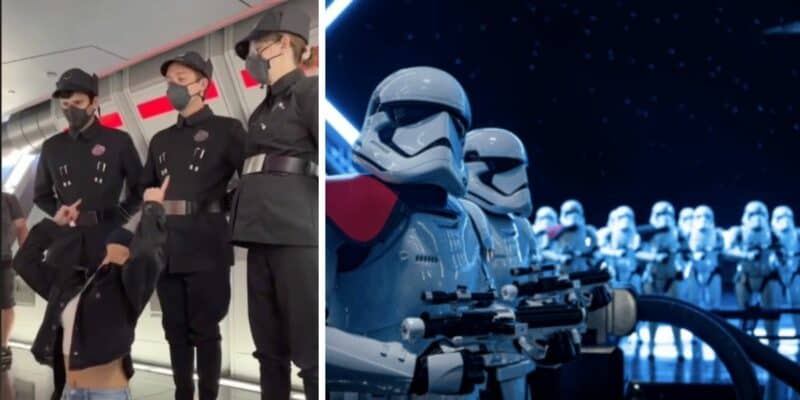 One of the worst things that can happen for a Guest who has been in a long line is to see the ride shut down. When this happens, and depending on the severity of the closure, Guests will have to make the decision on sticking around until the ride is back up and running, and therefore holding their spot in line for an uncertain amount of time, or leaving and having wasted the previous amount of time waiting. When a temporary closure occurs, it is not anyone’s fault, and some Guests are often determined to make the best of this.

Unfortunately, one of the most popular attractions at Disneyland Park is in Star Wars: Galaxy’s Edge, and it breaks down quite often. Rise of the Resistance is a highly coveted attraction no matter what coast you are on, and at Disneyland, individual Lightning Lane tickets to get on the ride with no wait can cost $20.00 per ride per person, making it the most expensive attraction that the Park has. It also is a ride that breaks down quite often. Typically, the ride system takes while to restart, which can cause a delay but never one that lasts terribly long, but of course, each closure is a case by case basis. The same occurs for the attraction, which is also located at Disney’s Hollywood Studios at Walt Disney World Resort. During one recent closure, one Guest tried to fill their time while being captured by the First Order by filming a TikTok.

Danielle (@imma.goofygoober.yeah) posted a TikTok of what she was doing while the ride was down. We can see the Guest kneeling and making a TikTok, and hilariously, three First Order Cast Members joined in. We cannot tell if they did so on their own accord or were asked, but their dagger eyes being projected upon the social media creator are perfectly in character.

It should be noted, however, that Guests should never ask a Cast Member to do something specific on camera, as they may not be allowed to do so, but oftentimes Cast Members will join in on the fun!

Below is the completed TikTok!

The empire followed me after this #starwars #disney #riseoftheresistance #hardtimes

The empire followed me after this #starwars #disney #riseoftheresistance #hardtimes

This attraction is also located at Walt Disney World, where Guests also have to pay a separate Lightning Lane cost; however, it is often below $20.00, making it slightly more affordable than Disneyland’s cost. We cannot tell what coast the video was filmed in, but it sure is a funny one!

Disney describes Rise of the Resistance as: