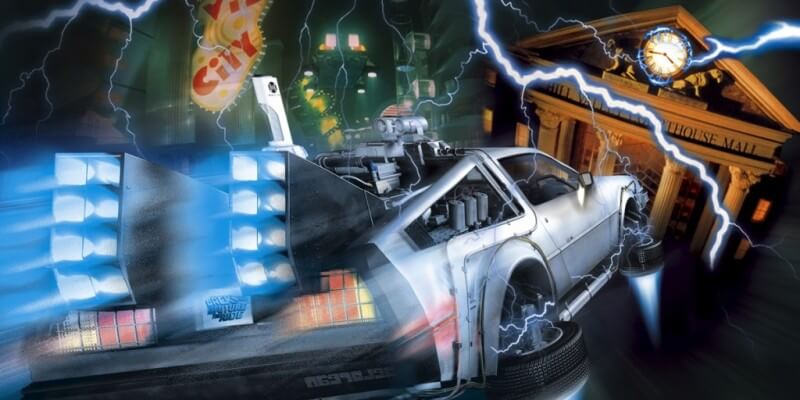 If you are a fan of Back to the Future and Jurassic Park, Universal Orlando Resort may be giving fans their swan song.

When it comes to the Jurassic Park and Jurassic World IP, Islands of Adventure have Guests covered. Islands of Adventure has an entire section dedicated to the dinosaurs with Jurassic Park Rive Adventure catering to the 1993 film starring Laura Dern, Sam Neill, and Jeff Goldblum, and Jurassic World VelociCoaster starring Bryce Dallas Howard and Chris Pratt. In the land, Guests can take photos with dinosaurs and fully immerse themselves in the prehistoric world of the dinosaurs.

Back to the Future, however, has not stood the test of time at Universal Orlando Resort.

When Universal Studios Florida opened in 1990, it took only one year to add the iconic Back to the Future IP to the Park. The attraction was based on Back the Future (1985), which starred Michael J. Fox (Marty McFly), Christopher Lloyd (Dr. Emmett Brown), Lea Thompson (Lorraine Baines), Crispin Glover (George McFly), Thomas F. Wilson (Biff Tannen), and more! Guests were able to board their very own DeLorean and go back to the future!

The simulator ride lasted years and was a true hit among Guests, but in 2007, it was lost to The Simpsons Ride, which reformatted the attraction to fit the new IP. With Back to the Future The Ride disappearing, along with Jaws, Beetlejuice’s Graveyard Revue, and more “original” IPs shutting down to make way for new attractions such as the Wizarding World of Harry Potter and Fast & Furious Supercharged, E.T. Adventure has seemed to be the only classic Universal offering that remained — and Universal sure does make sure that the Steven Spielberg attraction receives love.

Since then, Back to the Future has seemed to only exist as a sort of photo-op. Now, it looks like both IPs will be having more of an involvement at Universal. In CityWalk, The Groove shut down during the pandemic and never reopened, after construction walls went up and no return was confirmed, many speculated that the location saw its end. Now, Universal fans are under the impression that Universal is creating a Back to the Future and Jurassic Park-themed escape room. If you’re sitting there with your jaw on the floor saying “that’s heavy” right now, don’t worry, so are we.

It looks like the rumors are true, Universal Orlando are planing to open Jurassic World and Back to the Future themed escape rooms at CityWalk

The site has been quiet since walls went up Dec’ 21

It looks like the rumors are true, Universal Orlando are planing to open Jurassic World and Back to the Future themed escape rooms at CityWalk

The site has been quiet since walls went up Dec' 21 pic.twitter.com/S8cFNqCVft

Adding an escape room was something Disney World fans have noted that they wanted to see come to Disney Springs in place of The NBA Experience, so placing one in CityWalk would surely be successful as well, plus bringing back the Back to the Future fandom to the Parks in a bigger way would make a lot of fans happy!

At the moment, Universal has not confirmed these speculations to be true, so they remain about as accurate as fans assuming Shrek 4-D will become a walk-through minions attraction.

Would you want to see an escape room open at Universal Orlando Resort?