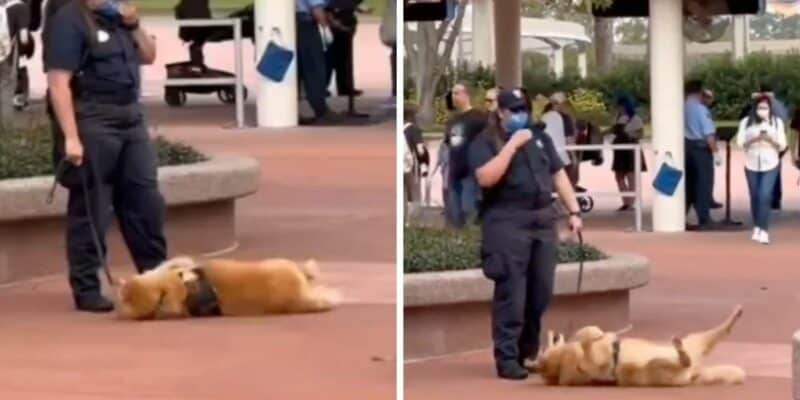 Every Disney Park around the world has increased security to ensure Guests have a magical, yet safe experience. In fact, last year, Walt Disney World took another step “into the future” and implemented a new contactless security system at all four theme parks — Magic Kingdom, EPCOT, Disney’s Hollywood Studios, and Disney’s Animal Kingdom — as well as at Disney Springs.

In addition to the new contactless security system, security officials are still walking around, some with security dogs.

The security dogs at Disneyland Resort and Walt Disney World Resort undergo intense training and play a vital role in ensuring the safety of everyone at the Parks on a daily basis. But that doesn’t mean that sometimes, even the security dogs need a break!

On a recent trip to EPCOT at Walt Disney World, Guests spotted one of the security dogs — a beautiful golden retriever — laying down on the job!

The adorable golden was seen rolling around on his back, having the time of his life while on his break, which the security official seemed to also enjoy.

You can check out the video, which was posted to Reddit, below.

Look at this cute dog taking a break while working at Disney! from WaltDisneyWorld

This sparked other Disney fans to chime in and tell some of their experiences with Disney security dogs, as one user said:

One time my wife and I were making our way through security at Epcot. There was a police officer and his police pooch taking scent passes behind inbound guests. Officer turns around and police pooch had his face in a big pile of popcorn that was on the ground. It was the cutest thing! When the officer saw that we had witnessed the pooch break protocol, he simply said, Perks of the job!” Great moment!

And another user, who did the Disney College Program, wrote:

I did the Disney College Program a few years ago, and my security class went on a field trip one day to the command center and also to the K9 training facility. They have a bunch of dogs from all over the world and they did a little demo for us of what they can do. It was so cool to see!

Have you ever experienced something like this with Disney security dogs? Let us know in the comments below.