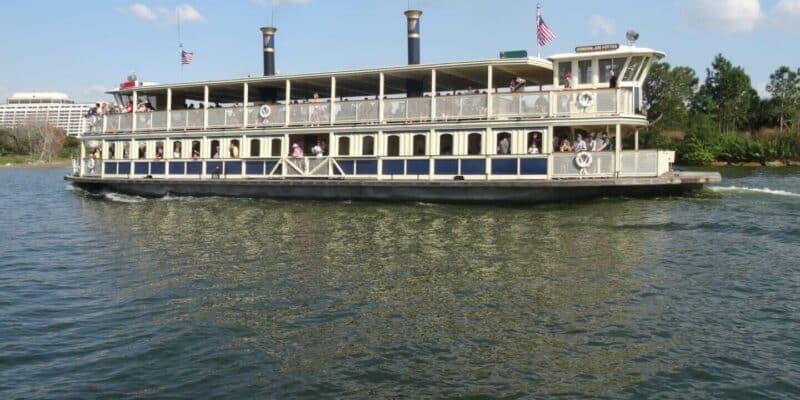 When Guests are floating over to Disney’s Magic Kingdom at Walt Disney World on the ferry, when it comes to wildlife swimming next to them, oftentimes, Guests may see a bird in the water, or maybe a fish.

Getting to Magic Kingdom by monorail is always a magical experience, as you can pass by hotels such as Disney’s Contemporary Resort, Disney’s Polynesian Village Resort, and Disney’s Grand Floridian Resort. But there is also something to be said about feeling the breeze wake you up as you head towards the main gates of Magic Kingdom, with Cinderella Castle looming in the background.

The Magic Kingdom ferry runs constantly, bringing Guests to and from the ticket and transportation center throughout the day. The ferry is massive and is able to transport a ton of Guests, and provides one of the best views when it comes to the grand entrance of Magic Kingdom Park. Today, the views were extra special as a little friend seemed to be swimming alongside all of the Guests.

Disney podcaster’s Happiest Podcast on Earth was on their way to Magic Kingdom when they noticed a deer was swimming through Seven Seas Lagoon! It looks like it was not just the Guests who wanted a taste of the Most Magical Place on Earth!

There is a ton of wildlife on Disney property, and although you may not see a fellow Bambi walking down Main Street, U.S.A, or into the streets of Tomorrowland, there are lots of deer located on the property. The most magical thing about this video is the elegance in which we can see the deer swimming along, almost as if it is galloping through the water!

If you want to check out more of the Happiest Podcast on Earth, you can listen to the magic they create here!

Have you ever seen a deer while on Disney World property? Let us know in the comments below!