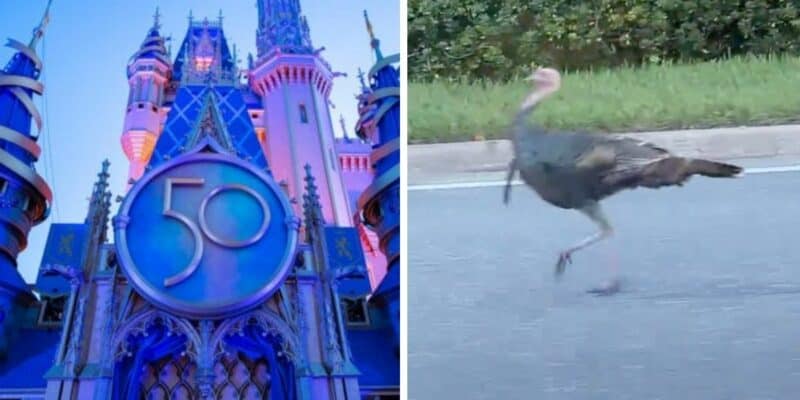 One of the best feelings for Disney fans is driving under one of the multiple Walt Disney World Resort archways and entering Disney property. Instantly you start seeing other cars filled with Disney Guests excited to enjoy the Most Magical Place on Earth, as well as all of the signage directing you to the Park or Resort you plan to go to next.

One thing that Guests may not expect to see, however, is a wild turkey.

As we approach Thanksgiving, the crowds have definitely made themselves known at Walt Disney World. We have reported on Magic Kingdom having shoulder-to-shoulder crowds at points and wait times growing as we get closer to the holiday. Ticket sales have halted for the holiday as all four parks are full of their Disney Park Pass reservations, which happened right as Annual Pass sales came to a stop, as well.

Well, even though Guests may not be able to purchase an additional ticket the day before Thanksgiving, it seems that one Disney turkey is determined to see Cinderella Castle. Theme Park YouTubers TPMvids (@TPMvideos) shared a Tweet of a wild turkey running down the streets of Disney World!

Nothing gets you ready for thanksgiving week like a wild turkey running down the streets of Walt Disney World 🦃 pic.twitter.com/NVc2dn5ilD

Of course, it is possible to see a wild turkey at Disney World on any given date, but it seems that the timing of this appearance is just too perfect! From the video, it is tough to tell what area of Disney property it was taken, but from the way that turkey was running, it seems that it was looking to make it to the Park before rope drop.

Have you ever seen a wild turkey grazing the grounds of Walt Disney World Resort?