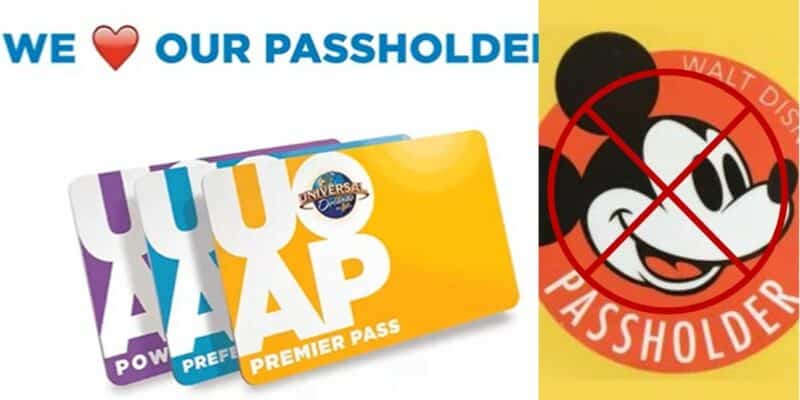 Well Disney fans, Walt Disney World Resort has launched another commercial opportunity for Univeral Orlando Resort. Last night, the news broke that Walt Disney World has paused the sale of Annual Passes. Yes, you read that right. And now, today, Disney World even put a pause on selling Park tickets for select days for the remainder of the year! So, of course, Universal does what they do best… capitalize on Disney’s head-scratching decision.

Currently, Disney World’s Incredi-Pass, Sorcerer Pass, and Pirate Pass sales are on pause. If you’re a Florida resident, you can however still purchase the Disney Pixie Dust Pass, but be aware of the large amount of block-out dates that come with the pass. And while Disney has not yet confirmed exactly why Annual Passes and ticket sales have been paused for Guests, or when they will resume, we know Universal is loving the whole ordeal. So much so that they took to Twitter to sneak in a little roast at the Disney Parks news.

Universal Orlando Resort took to Twitter to share, “‘Tis the season to give the gift of becoming a Universal Passholder” while including a “We love our passholders” image.

In all seriousness, Universal is so right! The gift of a Theme Park ticket (especially a Passholder one!) is a fantastic gift idea – so why not capitalize on Disney’s ticket pause.

When one follower mentions “Funny timing”, Universal hilariously tweets back “We’ve no idea what you’re referring to, just thought a reminder would be nice”… with a wink face included!

Are you planning to fill someone’s stocking this holiday season with a Universal Orland Resort ticket, or will you hold off for a Disney World trip?