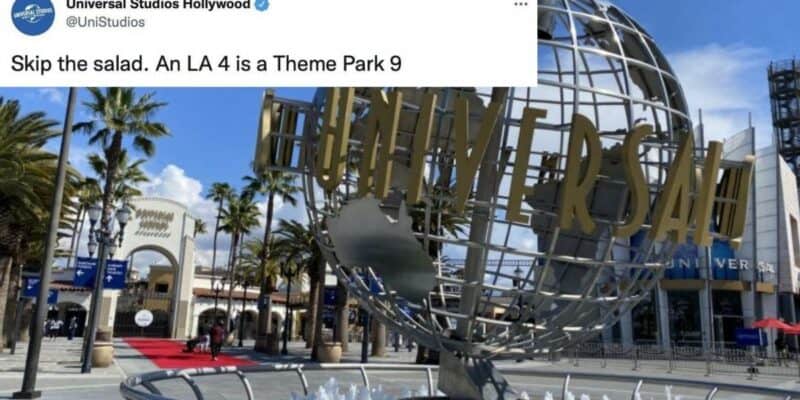 In the social media-obsessed world that we live in, certain posts are sometimes regrettable. The offending Tweets or posts can be deleted just as quickly as they were put up, but the internet never forgets.

Unfortunately for Universal Studios Hollywood, they sent out a Tweet that many deemed insensitive and, even though the offending tweet has been deleted, the theme park is still receiving a great deal of backlash online.

On August 26, Universal Studios Hollywood took to its official Twitter account to write, “Skip the salad. An LA 4 is a Theme Park 9”.

Many Twitter users immediately took issue with the Tweet and called it “fatphobic”  and believed that Universal was “fat-shaming” many of the people who would like to enjoy the parks — Universal, to their credit, quickly took the post down. However, the damage had been done, and Twitter was alight with many users sharing their displeasure with the Southern California theme park.

Not long after Universal Studios Hollywood deleted the tweet from its official Twitter account, it sent out another Tweet that did not acknowledge the mistake made. Social media users were not quick to let Universal forget its mistake.

Georgie Gould (@PanningforGould) was one of those people:

Your fans would respect you a lot more if you acknowledge your misstep and owned up to it.

Your fans would respect you a lot more if you acknowledge your misstep and owned up to it.

For many people, Universal has often been a theme park that does not cater to as many people as other theme parks, such as Disney. Social media users are taking this opportunity to tell Universal that, if they really wanted to make things better, then they would design their rides to be more inclusive. The websites for both Universal Studios Hollywood and Universal Orlando warn that Guests with a waistline of more than 40″ may not fit on a number of their rides.

Twitter users were not the only ones to notice Universal’s misstep. SeaWorld’s social media team also took note and used the error to Tweet out its love for all of its Guests, regardless of their size or what they eat:

Reminder: you’re all 10s in our book

Both the Universal Studios Hollywood and Universal Orlando Twitter accounts love to be sassy, and their tweets are often fun and evoke fun banter amongst followers. However, this tweet was far from one of those.

At this time, Universal has not responded to the intense backlash it has received, nor has the theme park issued an apology for the tone-deaf tweet. Rides at both Universal Studios Hollywood and Universal Studios Orlando are considered by many to be notoriously exclusionary, so this Tweet set off many Guests who love Universal but find themselves, or those that they are close to, left out of fully enjoying a Universal Studios experience.

Do you think that Universal’s tweet was offensive? Let us know in the comments!