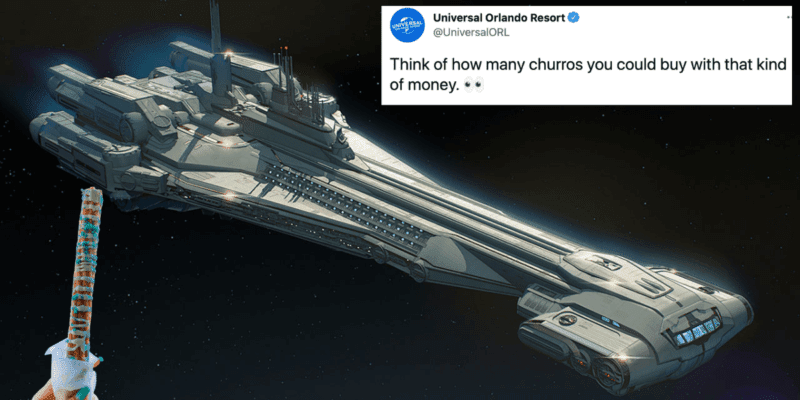 Today, Disney revealed some news that was sure to excite die-hard Star Wars fans across the galaxy — a ton of new information about the fully immersive Galactic Starcruiser experience was finally released. Not only were prices revealed for the Galactic Starcruiser, but special dining experiences, lightsaber building, and more were also announced. The new Star Wars experience will begin taking Guests to a galaxy far, far away beginning spring 2022.

The cost reveal was the catalyst for fellow Florida theme park giant Universal Orlando Resort jumping into the conversation.

For two Guests to enjoy the Galactic Starcruiser’s two-night Star Wars experience, the cost is just over $4,800 for a regular cabin. The highest price tag for a regular cabin is for four Guests, coming in at a whopping $5,999. It should be noted that those costs are for regular cabins; higher price tags will come with the more elaborate cabins.

That is quite a high price tag for just two nights. Shortly after the Star Wars: Galactic Starcruiser pricing was released, Universal Orlando speculated on different ways Guests could use all of that money.

Think of how many churros you could buy with that kind of money.

Think of how many churros you could buy with that kind of money. ?

The average cost of a churro is $5.50 at Universal Studios, so theoretically, a Guest could buy almost 873 churros for the same cost as two nights on the Galactic Starcruiser. For churro lovers, that may be the path they choose to go down, considering Universal Orlando offers several varieties of the warm, chewy, sugary snack.

The Star Wars: Galactic Starcruiser sample prices are for bookings taking place most weeknights between August 20, 2022, and September 17, 2022 — but the hotel is scheduled to open in spring 2022. There is currently no date announced for when reservations will open for the Galactic Starcruiser.

Which way would you spend $4,800 if you had it? Would you book the Star Wars: Galactic Starcruiser experience or buy a ton of churros? Let us know in the comments!