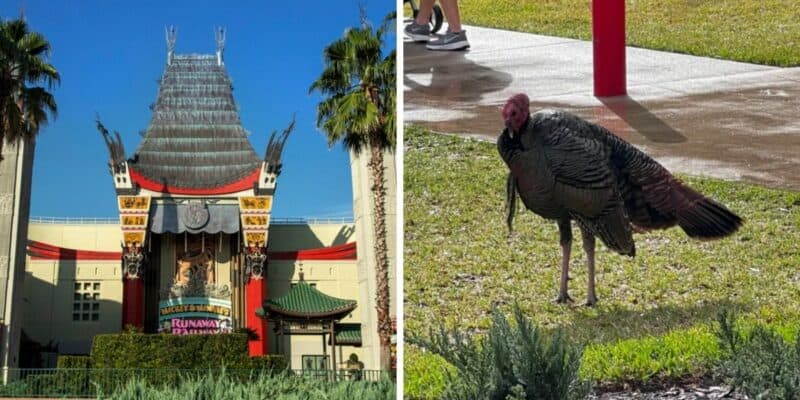 Walt Disney World is the spot to find your Disney characters. From Mickey and friends to the Disney Princesses, Guests love meeting with their beloved characters. But on a recent trip to Walt Disney World, Guests were in for a surprise appearance… from a real wild turkey!

Around Thanksgiving, Inside the Magic reported on a wild turkey running the streets of Walt Disney World, which Guests were able to catch on video. Now, it seems that the turkeys are getting a bit more friendly as one was recently spotted within close proximity of Guests near Disney’s Hollywood Studios.

Reddit user carson2210 posted a photo to the social media platform, along with the caption:

Wild Turkey outside Hollywood Studios during my recent visit

Wild Turkey outside Hollywood Studios during my recent visit from DisneyWorld

This is just one of many wild turkeys spotted around Walt Disney World. In fact, they are pretty common in the area, so if you see one roaming around property, do not worry. There is actually a well-known female turkey that has become part of the family at Disney’s Pop Century!

With all of this being said, it is clear the turkeys spotted on property are usually in close proximity to Disney World Guests walking by, meaning they have adapted to human life. Therefore, it is important to remember that if you see a wildlife animal, such as a squirrel or a wild turkey, inside one of Disney World’s theme parks, please do not touch or feed the animal.

Do you have a crazy wildlife animal story that happened at Disney World? Let us know in the comments below.