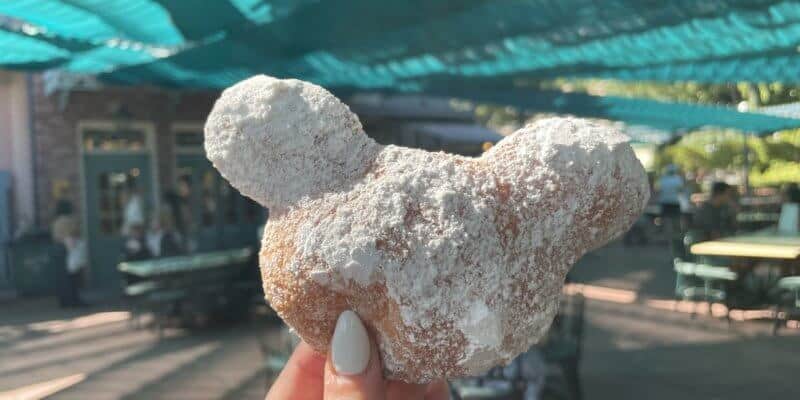 One of the best things that Guests are able to eat while at Disneyland is a beignet. The fluffy dessert is available for purchase at the Mint Julep Bar in New Orleans Square and is mouth-wateringly delicious, causing massive lines and hour+ mobile order pick-up time gaps.

Because of how good these sweet treats are, among other delicious food items at Disneyland like the churro toffee or the spicy mango Dole Whip riddled in tajin (to name a couple), the idea of throwing them away is something that no Guest could ever think of doing. The only downfall of the illustrious beignet is that they are quite messy, due to the overwhelming amount of powdered sugar. Although we would not have it any other way, it does mean that storing them in your backpack or bag during your Disney Park day could get tough, and the safest option is to manually carry the bag around until you have consumed all of them if you could not do so in one sitting.

Usually, this would not be too big of a deal, but it seems that even the sweetest of treats can get you in trouble!

One Guest took to Reddit to recount their story of eating a beignet while in line for Pirates of the Caribbean. It seems that one Guest accidentally bumped into her sister which meant that the beignet bag was flattened, causing the powdered sugar to shoot out of the bag and into the air. It seems that the sugary cloud that was created looked a little too much like smoke, which left one Cast Member intervening, reminding the Guests that they are not allowed to smoke on property.

Thecg98 shared the story in their own words.

So we ordered too many beignets and I decided to just save them and carry them around. (If I had put it in my bag the powder would get everywhere). We get in line for pirates and the line ends by the entrance. I accidentally bump into my sister, not realizing the line stopped, holding my Beignets in front of me and a puff of the powder goes into the air and all over my clothes. Then I hear a cast member telling me that no smoking is allowed in the parks . 😂 i realize she is talking to me, but she had walked away. I couldn’t help but laugh knowing she was seriously telling me to not smoke and just wanted to share lol

Then, the story got even better in the comments!

oh man. were you able to get all that powder off your shirt? sounds like a scene straight out of a comedy show!

Of course, we know that the Guest was not actually smoking, which is what makes the conspicuous actions that they continued to perform quite hilarious as it was totally understandable and unintentional. It seems that the Cast Member did not press the Guest about the “smoke” any further afterward but if the smoke was real, the Guest would have been removed from the Park potentially. The Guests were able to ride Pirates of the Caribbean and see Jack Sparrow whilst covered in powdered sugar!

At Walt Disney World Resort, beignets are harder to come by, but can be found at Disney’s Port Orleans French Quarter.