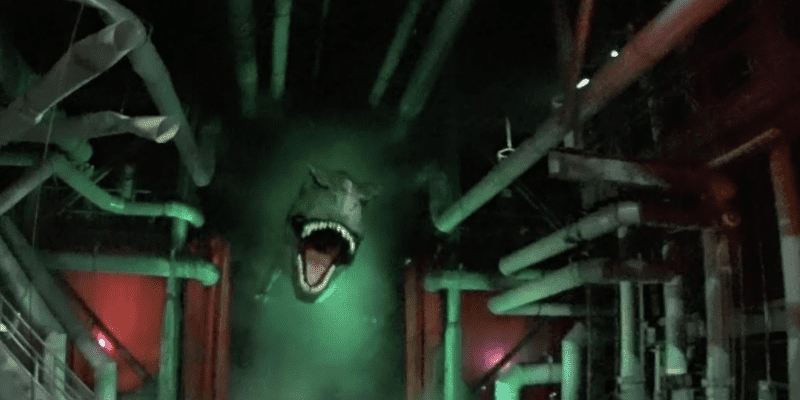 Now, with Jurassic World making entry into the land as well with Raptor Encounter and VelociCoaster, we have seen some aspects of the Jurassic land see some updates. When it comes to Jurassic Park River Adventure, there have been changes over the years, and now, it looks like one Universal Guest has caught a change that affects the terrorizing end scene of the T-Rex jumping out at Guests as they plummet the falls.

RidgeTop took to Reddit to show off a lighting change that they noticed as of late. It seems that the orange glow that lit the dino is now green, removing the imagery of fire.

Jurassic Park River Adventure lighting change. I noticed this on the last couple visits. I think I like the original orange tone a bit more. What do you think?

Jurassic Park River Adventure lighting change. I noticed this on the last couple visits. I think I like the original orange tone a bit more. What do you think? from UniversalOrlando

Captain00dles commented on what the lighting change may have been.

Looks like they switched to LED lightning over the old style lighting.

Movieguy2004 thinks that the lighting was meant to mirror what we see in the film.

I think the new one’s more accurate to the movie’s lighting and color pallet but the original looks creepier and more intense. Sort of a give and take I guess.

Clangan524 noted that the new lighting, although less terrifying, lets you see more of the dinosaur animatronics.

The orange is going for a more “scary blood and gore horror” feel while the new lighting is more natural is color tone. The newer lighting lets you see more detail in the Rex which I love. Somehow makes facing it more intimidating.

Basically, orange is trying to make you scared and natural is actually making you scared.

At the moment, the attraction is currently closed as it is down for its yearly refurbishment, but will be open again on January 28, 2022. In Universal Hollywood, we have seen their Jurassic Park attraction take a major turn as it is now representative of the Jurassic World franchise starring Chris Pratt (Owen Grady) and Bryce Dallas Howard (Claire Dearing).

At the moment, Revenge of the Mummy is also under a massive refurbishment at Universal Studios Florida. That being said, Guests can still enjoy attractions such as Rip Ride Rockit, MEN IN BLACK Alien Attack, Transformers: The Ride, and more. Visit Diagon Alley in the Wizarding World of Harry Potter, where you can venture into Gringotts!  Islands of Adventure has some fantastic attractions like the new Jurassic World VelociCoaster, The Incredible Hulk Coaster, Doctor Doom’s Fearfall, The Amazing Adventures of Spider-Man, and more! Volcano Bay is also open for those who want to get their splash on, and at the moment, Epic Universe is under construction with a potential 2025 opening date.

Which lighting sequence do you prefer? Let us know in the comments below!