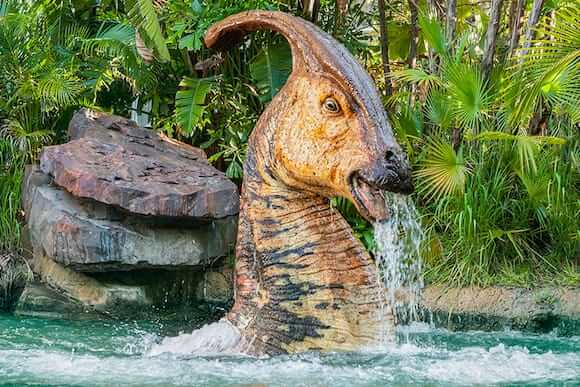 One of the single-most popular attractions at Universal Orlando Resort is an original that made its debut in Universal’s Islands of Adventure Park two decades ago: Jurassic Park River Adventure.

TikTok user @guttermousetattoo posted a video showing the difference in animatronics on the ride between when it first opened and now. They wrote:

The video focuses on the Parasaurolophus animatronic that knocks your boat off course and into the raptor containment area. Unable to be intercepted, you’re forced to make your way into the warehouse, where you’ll come face-to-face with a giant T-Rex and an 85-foot plunge.

In the video, you can see that the original Parasaurolophus was much more aggressive, jumping out of the water and bumping the boat. For more than the last decade, however, the animatronic is not quite as large and doesn’t come near as close to the boat.

Universal has seemingly never given an official reason for toning down the animatronic, but some have speculated that it might have been a way to make the attraction a little less intense for young riders.

Universal Studios Hollywood recently changed their Jurassic Park-themed water ride into a Jurassic World attraction. Chris Pratt can be seen as the iconic Owen Grady on the attraction as well as Bryce Dallas Howard as Claire Dearing. Universal Orlando also opened its first Jurassic World-themed attraction in the VelociCoaster.

Is it time for an update to Jurassic Park River Adventure or do you want the attraction to stay as it is?