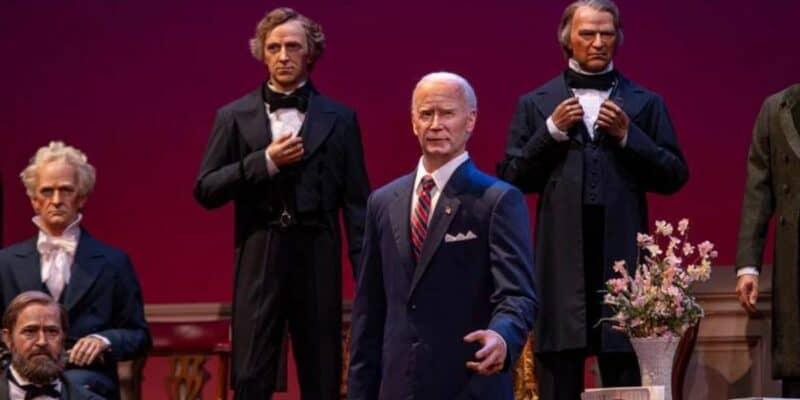 Disney’s Hall of Presidents brings Guests into a theater that showcases realistic audio-animatronics replicas of every President of the United States, all together for the very first time.

During a recent visit to the Hall of Presidents at Walt Disney World, one of the President animatronics hilariously malfunctioned mid-show.

Many Disney World Guests visit the Hall of Presidents, not only to escape the Florida heat and relax their feet, but to see the realistic Audio-Animatronics replicas of every President of the United States. While inside the theater, Guests will hear speeches delivered by George Washington, learn more about the formation of our Constitution, listen to Abraham Lincoln deliver his Gettysburg address, and more.

😳😳😳 Have you ever BEEN to the Hall of Presidents at Disney? 💬✨ #disney #disneyparks #disneyworld #wdw #fail #blooper #coffee

This is not the first time we reported on a President animatronic malfunctioning as last summer, a video surfaced showing the Abraham Lincoln animatronic fall over. You can read more about that incident here.

The Hall of Presidents has been a pretty hot topic, especially since the highly controversial 2016 election. In fact, Disney fans did not hold back voicing their opinions regarding Disney’s Hall of Presidents attraction as Disney closed the attraction to make way for a new animatronic showcasing President Donald Trump.

A now-closed petition even garnered over 15,000 signatures at one point when Disney fans wanted the theme park to break tradition and not allow the Trump audio-animatronic to speak within the attraction. And, once the Donald Trump animatronic debuted, other Disney fans demanded it to be redone.

Disney World continued on with the planned refurbishment, and eventually, a Donald Trump animatronic was added to the Hall of Presidents. And more recently, Disney continued this tradition and added our now President — Joe Biden — to the Liberty Square attraction, which you can see in the image below.

Have you ever visited the Hall of Presidents in Disney World? Let us know in the comments below.