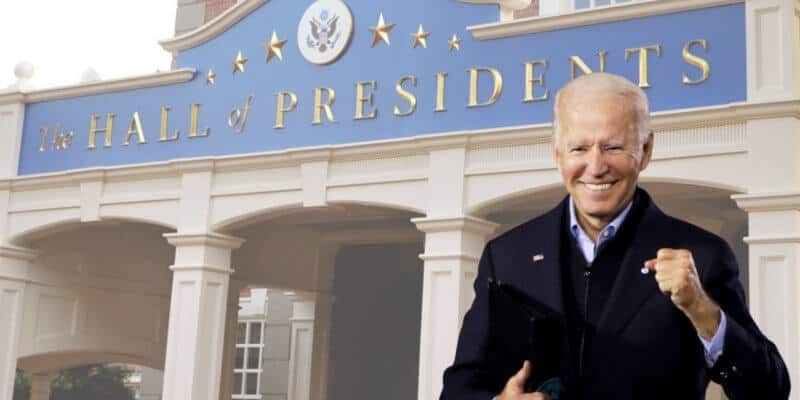 On January 19, after Magic Kingdom closed for the day, the Hall of Presidents attraction, located in Liberty Square, was also closed — but this was not just an overnight thing. It was for a lengthy refurbishment (which is still occurring) to add a President Joe Biden animatronic figure into the theater.

This refurbishment shouldn’t come as a shock as January 20, 2021, marked the Inauguration Day of President Joe Biden. Every time the United States gets a new President, the Hall of Presidents attraction at Magic Kingdom gets a new audio-animatronic, which requires the attraction to be closed for some time.

Now, a few months later, it looks like Disney is continuing to work on the attraction as a new permit has been filed.

If you aren’t familiar, Disney’s Hall of Presidents brings Guests into a theater that showcases realistic audio-animatronics replicas of every President of the United States, all together for the very first time.

And, as previously mentioned, every time the United States gets a new President, an animatronic figure representing them are added into the theater. The last time Disney’s Hall of Presidents theme park attraction underwent a refurbishment was in 2017 when Donald Trump became President.

Now, as Disney prepares to add President Joe Biden into the Magic Kingdom attraction, as well as make any other minor changes during the refurbishment, a new permit has been filed for construction. The contractor listed on the permit is Buena Vista Construction Company, which is Disney’s own construction firm.

There are not many other details listed on the permit, but this is an indication Disney is continuing to work on the Magic Kingdom attraction and ensure it is in tip-top shape for when they are ready to reopen.

More on Disney’s The Hall of Presidents Attraction

If you’ve never experienced The Hall of Presidents, the official Walt Disney World website describes this theme park attraction as the following. Note that the description will be updated after President Biden has been added.

The Presidents Will See You Now

Watch the curtain rise to reveal startlingly realistic Audio-Animatronics replicas of every President of the United States—together for the very first time. Hear speeches delivered by George Washington and the newest addition to the Hall, 45th President Donald J. Trump.

Are you excited for when Hall of Presidents reopens? Let us know in the comments below.

If you want to visit Walt Disney World on your next Disney vacation, but aren’t sure where to begin planning — Don’t hesitate to reach out to our friends at Academy Travel. The Authorized Disney Planners will be with you every step of the way when planning your magical vacation, including arranging theme park tickets, booking your Disney World Resort, helping with dining reservations, and more! You can get started today by clicking here.