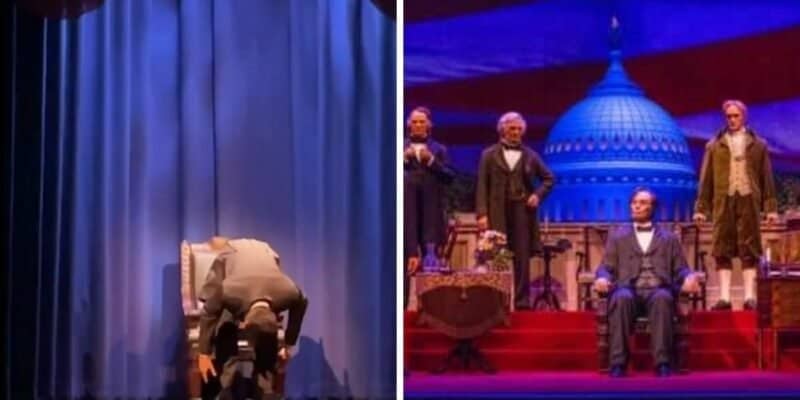 The Hall of Presidents at the Magic Kingdom in Walt Disney World recently reopened after a brief refurbishment period. However, it seems that not every animatronic is in working order despite the refurbishment.

Recently, the Abraham Lincoln animatronic keeled over during a performance of the Hall of Presidents. The hilarious malfunction was captured by a Disney Parks Guest and shared on social media.

It would appear that for at least one showing of The Hall of Presidents, Abraham Lincoln had some difficulty getting out of his chair. The audio-animatronics used to recreate the presidents are very sophisticated, and so it doesn’t take much for a malfunction to occur. While this scene in the show is usually more serious in tone, it is a funny mishap to have the animatronic malfunction.

You can see the video that captured this malfunction by TikTok user @daytonac500 below:

Have you watched The Hall of Presidents? The show is tucked away in Liberty Square and is worth the watch if you are interested in the history of the United States of America. Here is how Disney describes the show:

The Hall of Presidents reopened to Guests at the Magic Kindom earlier this month. It went through a day of soft-opening performances, but now any Guests visiting the Park can enjoy the show.

It is worth noting however that malfunctions do happen and may, from time to time, close the show temporarily. So be sure and keep an eye on your My Disney Experience app to see showtimes and operational status of The Hall of Presidents or any attractions when you visit Walt Disney World.

Have you ever seen an animatronic malfunction during a performance of The Hall of Presidents? Let us know in the comments.