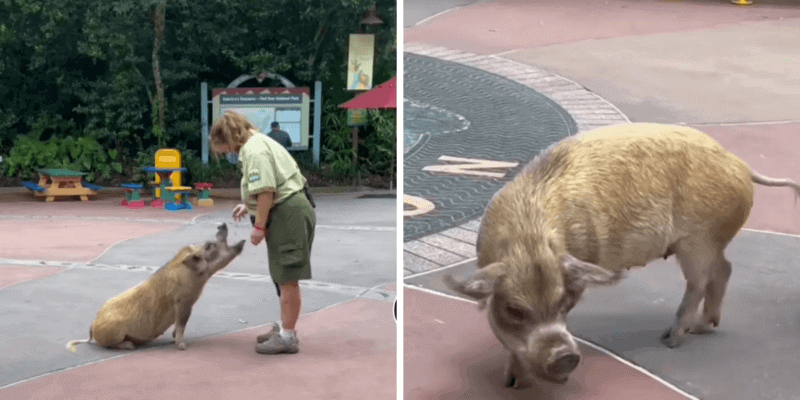 Disney’s Animal Kingdom is a unique blend of theme park and zoo. If you have ever visited Animal Kingdom you have likely seen many animals on the Kilimanjaro Safari attraction, or in some of the many exhibits found dotted around the park.

Speaking of dots, Disney’s Animal Kingdom is home to one famous and talented pig, Dottie! Have you ever met Dottie?

Dottie is a talented and sweet pig, you may see her on a walk with a human friend while visiting Disney’s Animal Kingdom. One Disney Parks fan caught an interaction with Dottie on video and shared it on social media. Dottie can perform a few tricks and loves to put on a show for Guests, provided there are treats involved of course!

You can watch Dottie in action thanks to @merelymeredith on TikTok below:

Related: Magic Kingdom Attraction Set to Close For ANOTHER Refurbishment

Some animal interactions do not always go as planned. Recently once Guest was visiting the Gorilla’s at the Gorilla Falls Exploration Trail tucked away in Disney’s Animal Kingdom. While everything seemed to be going well at first, the Gorilla decided to fling its poop at the Guest! You can watch a video and read more details about that situation here.

What else is happening at Disney’s Animal Kingdom?

For the 50th anniversary of the Walt Disney World Resort that begins on October 1, 2021, Animal Kingdom will debut new entertainment offerings. Firstly, a brand new daytime show called, Disney KiteTails will debut for Guests. In addition, the Tree of Life which is the icon of the park will be illuminated in the EARidescent colors of the 50th anniversary each and every evening.

If you want to visit Disney’s Animal Kingdom you will need valid theme park admission, as well as an advanced online Park Pass reservation.

Let us know if you have ever seen Dottie the pig in the comments below!

Want to book a Walt Disney World vacation for the Resort’s 50th anniversary? We can help, click here for more information.