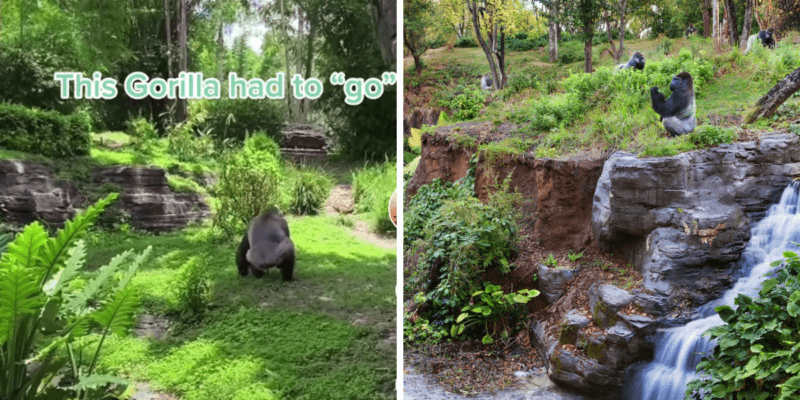 Disney’s Animal Kingdom is a theme park zoo hybrid that is both unique and interactive. You can see the animals in the popular Kilimanjaro Safari attraction, or take one of the walking trails. These animals are real and can be unpredictable, and the encounters with them often make for unforgettable experiences.

One Guest got a truly unforgettable experience while they were enjoying the Gorilla Falls Exploration Trail when suddenly a Gorilla decided to throw poop at them. See the full video below.

Related: DINOSAUR Is Rife For Retheme as Disney Pulls All Merchandise

Recently we shared a video of the gorillas playing with a snake that wandered into their enclosure. You can watch that video here. Now there is more gorilla action at Disney’s Animal Kingdom but it is certainly not the “good clean fun” you might expect at Disney!

One user on TikTok, @lovindisworld captured a moment that I am sure they will remember forever. A gorilla defecated in its hands and launched its poop towards them! Thankfully, @lovindisworld was able to dodge the projectile poo, but they did catch the hilarious moment on camera. Why do I have the sneaking suspicion this was not this gorilla’s first time doing this?

You never know what the animals will do during your visit to Disney’s Animal Kingdom, but I will suggest that you wear a poncho next time you walk through the Gorilla trail.

If you have never been to the Gorilla Falls Exploration Trail, here is how Disney describes the experience where you can encounter gorillas, hippos, and many exotic birds:

Encounter exotic animals as you trek through dense forests and sprawling savannas. Embark on a self-guided tour of the Pangani Forest and experience amazing creatures in their natural habitats—up-close and personal!

Follow the Trail
Meander along winding paths amid a lush forest trail of African flora and fauna. Spot an adorable meerkat on a rocky perch or an impressive Grevy’s zebra on the savanna—before coming face to face with a gentle troop of western lowland gorillas on a grassy hillside—who are just as curious to see you as you are to see them!

During your hike, snap pictures from convenient observation stations and learn more about the animals you see and Disney’s global conservation efforts to protect them and their habitats.

Personally, I enjoy both this walking trail and the Maharajah Jungle Trek that features Tigers. I have never had poop flung at me while enjoying the trail and seeing the animals, have you?

Disney’s Animal Kingdom will de debuting a brand new daytime entertainment show on October 1, for the 50th anniversary of Walt Disney World. The show will be called Disney KiteTails and you can read more about that here.

What is the craziest animal encounter you have had at Disney’s Animal Kingdom? Let us know in the comments below!

Want to book a trip to the Walt Disney World Resort? We can help! Click here for more information.