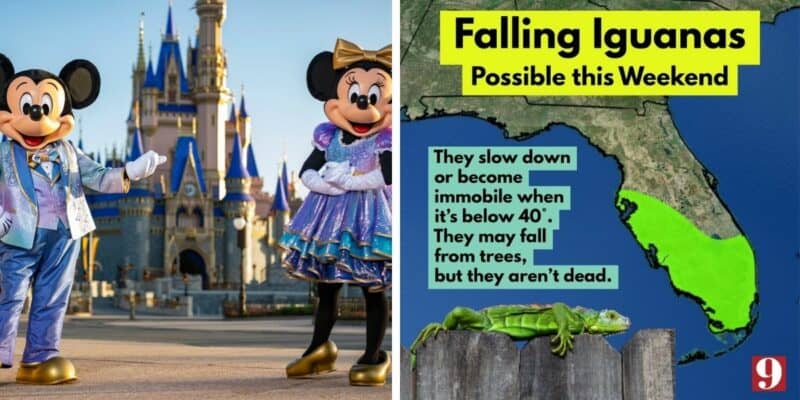 Imagine strolling through Florida, and out from a tree falls an iguana? It sounds hard to imagine that the term “falling iguana season” could be real, but, it is, and it is here.

As we have noted, there is an arctic blast headed to Disney World this weekend, where temperatures are expected to drop as low as 20 to 30 degrees. During the day today, Floridians and tourists in the area can expect a cold front of 40 to 50 degrees, meaning it is going to be frigid weekend in the sunshine state.

Florida is home to over 20,000 iguanas, who are able to move freely in the warm weather, which is usually never a problem. They do, however, have a tough time moving in cold weather. Once it hits around 40 degrees, iguanas stiffen up and become immobile at times. This often causes them to lose their grip on a tree branch, and leaves them falling out of the tree and onto the floor.

This process is called being “cold-stunned” and can actually be quite dangerous for the reptiles, sometimes leaving them dead from the process. The good news for our little iguana friends is that once the temperature warms up, they are able to recover fairly quickly. It seems that they will need to make it through the weekend before that happens, however.

USA Today noted that “Brian Shields, a meteorologist at WFTV in Orlando, warned that iguanas could slow down and become immobile when temperatures drop below 40 degrees. As they slow down, the animals can fall from trees onto the ground.” Shields took to Twitter to warn Floridians of the possibility and noted that Saturday night would likely be when most iguanas will make their fall.

As we mentioned, this is not totally uncommon for Florida; in 2020, the National Weather Service in Miami issued an unofficial warning to residents to look out for “falling iguanas” during an icy surge. Luckily, Guests visiting Magic Kingdom, EPCOT, Disney’s Animal Kingdom, and Disney’s Hollywood Studios this weekend will not see the iguanas on the floor, as they do not reside within the trees of the Disney Parks, but if you are staying outside of the Parks, or are a Florida local, this is something you may end up seeing! Luckily, you now know that it is totally normal, and the iguanas will perk back up as soon as the sunshine hits, which is how some of us Florida locals act anyway!

At Walt Disney World Resort, there may not be a falling reptile coming your way, but the whipping winds are very present. Be sure to bundle up accordingly this weekend, and as a reminder, Disney has closed Typhoon Lagoon through to Monday due to the cold front. Splash Mountain is currently under refurbishment, so making a splash on this frigid day is nearly impossible for Guests, which is likely a very good thing!

Have you ever heard the term falling iguanas? Did you know that this is a possibility? Let us know in the comments below!

At Magic Kingdom there is so much to see and do! Cinderella Castle is decked out for the 50th anniversary, and soon Festival of Fantasy and Mickey’s Royal Friendship Faire will return. You can ride the three big mountains: Space Mountain, Splash Mountain, and Big Thunder Mountain, or calm things down on Peter Pan’s Flight. Rope drop the Park to get on Seven Dwarfs Mine Train and then enjoy a mid-day snack with some Dole Whip. Be sure to meet Mickey Mouse and enjoy the firework show, Disney Enchantment!