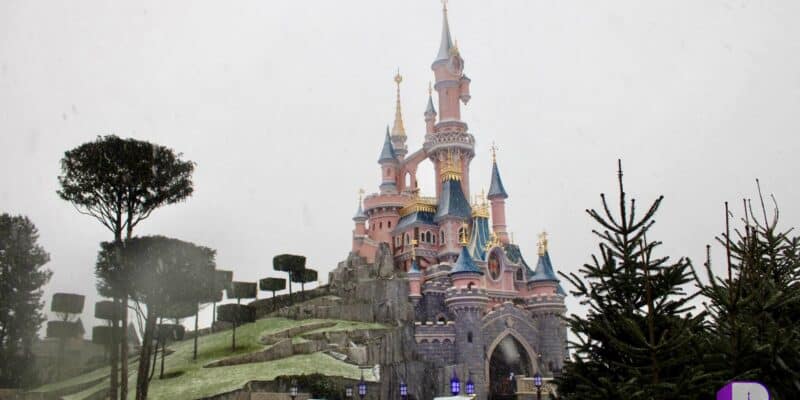 It’s beginning to look a lot like Christmas at one Disney Park, and we are not talking about an excessive amount of snoap being sprayed out of a cannon.

When Guests visit Disney World, they are never able to see much of a winter wonderland, even if all of the Parks are heavily decorated for the holidays. Being in Central Florida, Orlando may get a slight chill, but snow is not ever in the forecast. That being said, snow is possible in other Disney Parks around the world. Today marked a significant moment in the Disneyland Paris holiday season as both Disneyland Park and Walt Disney Studios Experienced their first snowfall of the year!

Luckily, the snow did not come in the form of a snowstorm, so it seems that it is still business as usual at Disneyland Paris; however, there is a lot of it! On social media, a few Disney and theme park accounts have shared the snowfall, and it looks stunning.

Dedicated to DLP (@DedicatedToDLP) Tweeted a video of the flurries among the decor!

Omg how fun is this? Cold, but fun!! Love seeing the DLP Christmas decor among the flying snowflakes.

Of course, DLP Report (@DLPReport) was on the scene capturing the snowfall!

Photos: the first snowfall of the season across the lands at Disneyland Paris

❄️ Photos: the first snowfall of the season across the lands at Disneyland Paris 🌨 pic.twitter.com/dZ78fGsO8k

Below, we can see Guests came prepared for the weather with umbrellas to ensure that they stayed as snow-free as possible.

Video: the first (real) snowfall of the season at Disneyland Paris this morning!

❄️ Video: the first (real) snowfall of the season at Disneyland Paris this morning! pic.twitter.com/p4pfgOzZZs

Since November 13, we have seen the holiday crowds roll into Disneyland Paris Resort as Disney’s Enchanted Christmas begins Disneyland Paris. Guests are able to enjoy holiday entertainment, decorations, characters, delicious food options, and so much more! Plus, with Sleeping Beauty Castle being revealed more and more each day, there is even more desire to head back to the Park to see the newly refurbished masterpiece!

What do you think of this first snowfall at Disneyland Paris?