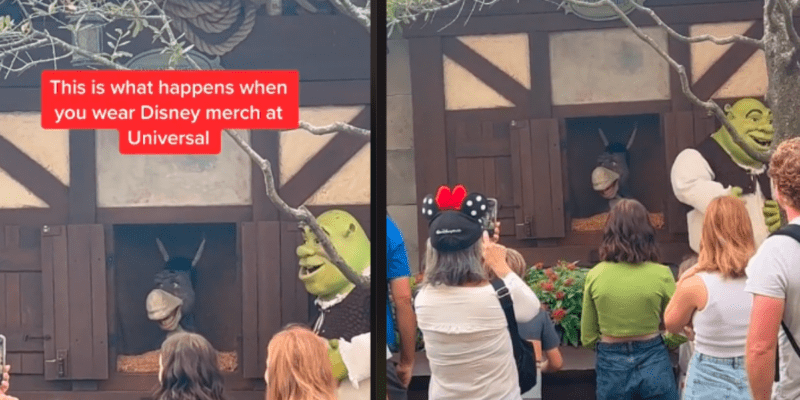 When it comes to Walt Disney World Resort and Universal Orlando Resort, there is a distinct and healthy rivalry that will seemingly always be present.

For theme park lovers who follow the two companies on social media, it is quite common to see Universal Orlando Resort throw some shade the way of their competitors and even the characters in the Parks at Universal Studios Florida and Universal’s Islands of Adventure have begun to follow suit from time to time.

TikTok user @sarahbarkley__ recently posted a video of an interaction with Donkey at Universal Studios Florida with some Guests that Donkey dubbed as “disrespectful.”

Jokingly, Donkey pointed out that the Guests knew they were heading to Universal Orlando Resort on that day and yet the chose to wear Disney apparel. He said that brings disrespect on him, Shrek, Fiona, Dragon, Gru, the Minions, E.T., Men In Black, and the entire host of characters at Universal Studios Florida.

Of course, we can see the group of people around him laughing, many of which are wearing Walt Disney World apparel, and everyone is having a great time.

Related: Should Universal Guests Be Mocked For Wearing Disney Apparel to Parks?

Going to both Universal Orlando and Walt Disney World relatively often, I can attest to the fact that you’ll see apparel from both Parks make their way to their competition. It’s not uncommon to see a Jurassic Park t-shirt or a Harry Potter robe being worn at Disney, and it’s also not uncommon to see Mickey Mouse ears or Disney World merchandise being worn at Universal.

Speaking of Shrek and Donkey, the famed ride Shrek 4-D just recently shut down for good.

In addition, Revenge of the Mummy is currently undergoing a massive refurbishment at Universal Studios Florida and isn’t expected to reopen until late summer.

That being said, Guests who visit either Universal Park can still enjoy attractions such as Rip Ride Rockit, MEN IN BLACK: Alien Attack, Transformers: The Ride 3D, The Simpsons Ride, and more. Visit Diagon Alley in the Wizarding World of Harry Potter, where you can venture into Gringotts!  Universal’s Islands of Adventure has some fantastic attractions like the new Jurassic World VelociCoaster, The Incredible Hulk Coaster, Harry Potter and the Forbidden Journey, Hagrid’s Magical Creatures Motorbike Adventure, The Amazing Adventures of Spider-Man, and more! Volcano Bay is also open for those who want to get their splash on, and at the moment, Epic Universe is under construction with a potential 2025 opening date.

What do you think of this hilarious exchange between Donkey and Universal Orlando Guests?