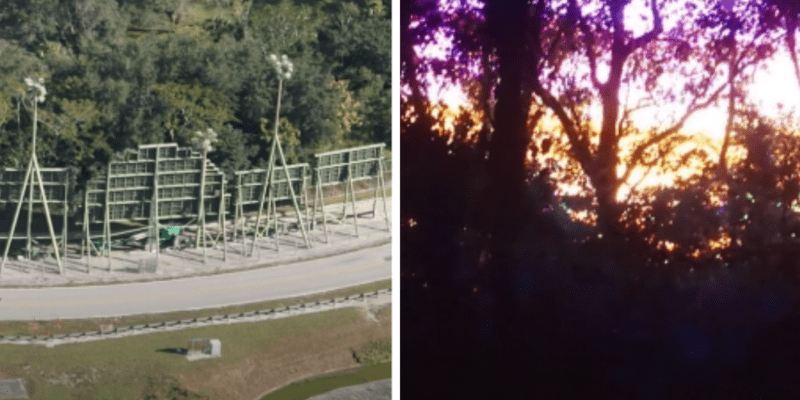 It may be hard to believe, but Walt Disney World Resort interestingly enough actually controls some parts of the weather.

If you take a tour of Kilimanjaro Safaris in Disney’s Animal Kingdom, might be able to peer through the trees and see some lights towering with walls placed in front of them.

Disney TikToker @themouselets shared an interesting video for what those lights and walls are used for.

With Disney Parks hosting special night tours on Kilimanjaro Safaris– which started back in 2016– they needed a way to produce their own sunlight, in particular, sunset. These lights allows Disney to create an artificial sunset and provide more light for the nighttime tours.

Here is what Walt Disney World Resort says about Kilimanjaro Safaris and the special night tours.

Unique Animal Encounters
Spot a shy hippopotamus nestled in a still pond. Behold a regal lion sunbathing on a rocky perch. Drive past a gentle giraffe grazing on the tall trees or wave hello to a swinging baboon. Other amazing animals you may encounter include rhinos, cheetahs, crocodiles, elephants, hyenas and zebras—and so many more!Since animals have minds of their own, every expedition is a unique and unforgettable experience. Be sure to keep your eyes open and have a camera ready—you never know what you’ll see on a Kilimanjaro Safaris outing.

Venture onto the savanna for a safari tour after dark—and see the animals in a whole new light. Previously off limits to visitors after sundown, this unforgettable journey through the reserve allows you to witness rarely seen nocturnal animal behaviors. Strategically placed lighting evokes both the setting sun and rising moon, so you won’t miss a moment. And as always, your friendly safari guide is on hand to share expert knowledge.

So, funny enough, Disney actually has found a way to control the weather, at least in one respect. It’s almost like magic! Disney often adds in a lot of external technical elements to attractions to create a more immersive environment. For example, smellitizers will have your mouth dripping when you walk by a popcorn stand as the scent is being artificially pumped out to get you feeling a rumble in your tummy! The tool is also used on many attractions such as Haunted Mansion, Pirates of the Caribbean, Spaceship Earth, Soarin’, and more.

Have you ever done a Kilimanjaro Safaris at nighttime in Disney’s Animal Kingdom?