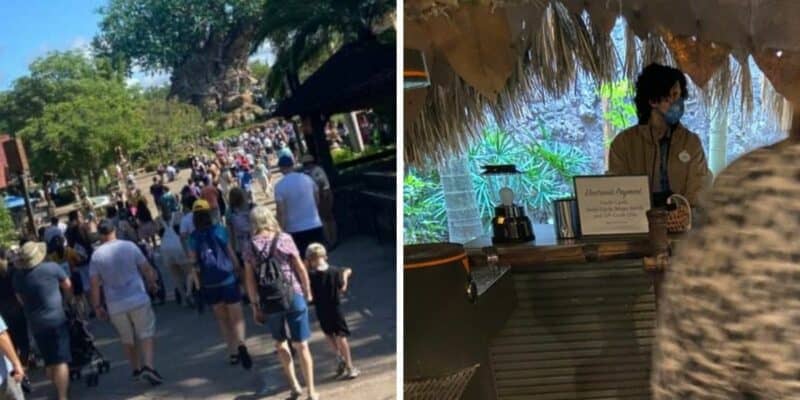 As the world continues to fight the ongoing pandemic, many families are eager to travel and vacation again. Walt Disney World, in particular, has seen an increase in crowd levels over the last few months despite the new omicron COVID surge.

As more Guests visit the theme parks, we are also seeing an increase in ride lines. In fact, we have reported on how the Space Mountain line wrapped through Tomorrowland at Magic Kingdom and how the Avatar Flight of Passage line completely took over Disney’s Animal Kingdom.

Now, we are seeing another ride line become so long that Cast Members were stationed halfway through selling drinks to Guests.

Na’Vi River Journey is located at Disney’s Animal Kingdom and remains one of the more popular attractions at the theme park, right behind Avatar Flight of Passage. Guests are always eager to board the riverboat and glide down the visually stunning and mysterious river.

And as more families visit the theme parks at Walt Disney World, the ride lines are becoming longer and longer, including for Na’Vi River Journey. In fact, a few days ago the line for Na’Vi River Journey at PANDORA — The World of Avatar was so long that Disney had stationed a Cast Member halfway through to give Guests the opportunity to purchase beverages.

The line for Navi River Journey is so long, they have a Cast Member selling drinks halfway through

The line for Navi River Journey is so long, they have a Cast Member selling drinks halfway through from WaltDisneyWorld

We have also noticed something similar to this at Millennium Falcon: Smugglers Run at Disney’s Hollywood Studios. And when Avatar Flight of Passage first opened at Disney’s Animal Kingdom, we reported on bathrooms being installed for Guests since there was such a high demand for the ride, causing an extremely long line.

If you are planning on visiting Disney World on your next vacation, be sure to familiarize yourself with the current safety protocols at the theme parks. You can view them by visiting the official Walt Disney World website here.

Have you ever seen a ride line so long that a Cast Member was stationed halfway through to sell drinks? Let us know in the comments below.