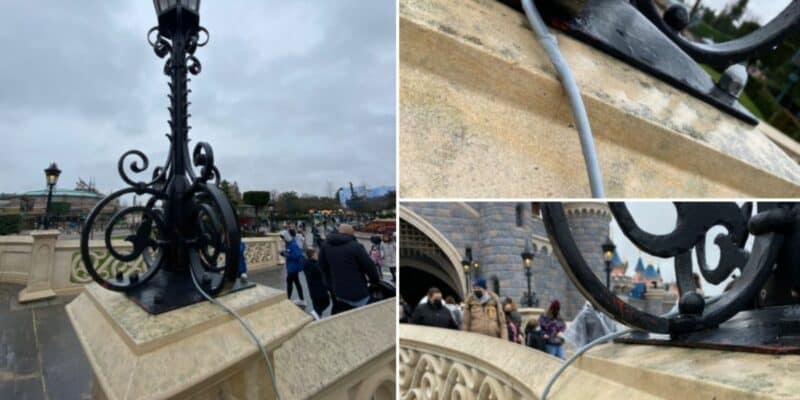 Let there be light!

Disneyland Paris has been undergoing a ton of change as the Resort ramps up for their 30th anniversary, which will begin this year. With the anniversary coming up, a lot of refurbishments and new additions have been added to the Parks. At Disneyland Park, one of the best new additions has been the updates to Sleeping Beauty Castle. The castle remained covered for nearly a year, and it has been lovely to see the vibrant colors and magical details revealed.

We previously reported that the bridge ways were in need of refurbishment and that Disney was working on making those changes. Now, it seems that some new lighting was added to the lamp posts, but things are not looking as slick as Disney typically presents.

Disney Cave 0F Wonders (@Cave0FWonders) Tweeted multiple photos of what seems to be some exposed wiring!

It seems likely that Disney will plan to cover up the wiring and properly hide it from Guests in the near future, as it can present as a safety hazard.

At Disneyland Paris, lots of changes are coming to Walt Disney Studios and their Disneyland Park, with the 30th anniversary just months away. Walt Disney Studios is adding a massive addition that will include Star Wars, Marvel, and Frozen, as well as their very own Avengers Campus, which will be the first section to open in the Park. One of the biggest changes that we have seen is on Sleeping Beauty Castle, which was covered by a box facade for months.

Are you planning on going to Disneyland Paris in 2022? Let us know in the comments below!