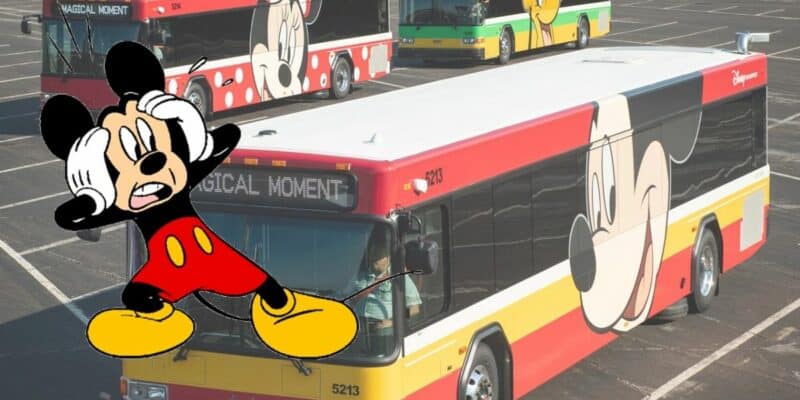 Two Disney buses collided in Disney’s Animal Kingdom Park bus loop on Thursday, January 13, 2022, resulting in quite a bit of damage to the transportation units. Normally so efficient and cautious in their operation, literal fender benders like these are rare, but accidents can still happen. While the collision was fairly mild, the ripping apart of panels upon the buses separating is jarring.

Around 5 p.m., Disney Guest Campbell Cave was waiting to board a Walt Disney World Resort Park to Park transportation bus when he both heard and saw the collision take place. In each Walt Disney World theme park parking lot (or bus loop) Disney Guests can board a bus not only to their favorite Disney Resort Hotel but to another theme park as well. This makes for easy Park Hopping and Disney Springs shopping for those on a Disney vacation.

But while waiting for his EPCOT transportation to arrive, Cave saw two buses attempting to park next to one another scrape into position. The tail of the approaching bus came so close to the parked bus that the wheel and wheel well started to peel apart the parked bus. He immediately took this photo of the collision and posted it on Facebook in a private Disney-lovers group.

While the bus crash collision is jarring enough, it could be a mild fender bender with no more damage than a paint scrape. As the Disney World bus drove forward and separated, Cave was still watching. Sadly, the damage was prominent. What appears to be a rear panel or perhaps a vent cover is peeled back, the metal reaching into the air. The corner light panel is also dangling at the corner. There are currently no reports of personal injury.

Typically, Disney buses involved in an accident will stop immediately and call in. Reports will be made, and a second form of transportation will be called to pick up the Disney Guests and continue on to their destination. This can easily take a lot of time, but fortunately, this occurred in a Disney bus lot where buses usually arrive every 20 minutes.

In 2018, another set of Disney buses crashed, again at EPCOT, but this collision was so intense that it sent 15 Disney Guests to a nearby hospital. It occurred at the EPCOT auto plaza, where parking tolls are collected.  In 2020, a third-party charter bus caught fire at the Ticket and Transportation Center, blowing smoke in all directions.

We hope that Disney’s own mechanics at the bus depot are able to repair the damage to the vehicles and get our Disney buses back in operation on EPCOT Center Drive. Stay tuned to Inside the Magic for more updates.

What’s your favorite form of Disney Transportation? Is it the Disney buses? Leave us a comment below!