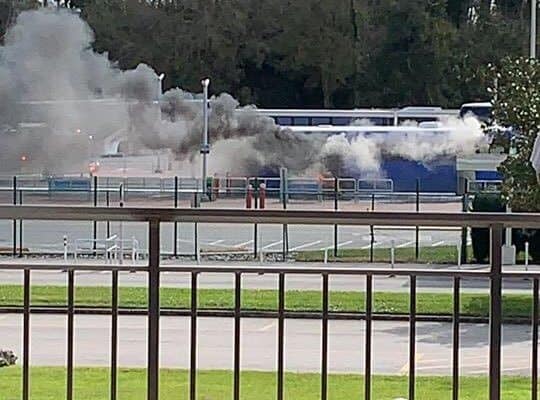 Early this morning, on February 16, 2020, it was reported that a third-party charter bus had caught fire at Walt Disney World Resort.

As of now, it looks like the fire has been controlled and extinguished but early this morning, it was a bit chaotic. It was reported that there was a charter bus at the Transportation and Ticket Center located in Walt Disney World Resort that had caught fire and was reportedly blowing smoke while it was parked.

The charter bus was not affiliated with the Disney Bus Transportation as it was a third-party bus.

Another Twitter user shared this tweet about the bus fire. It looks as though this third-party charter bus was a diesel bus engine, which exploded causing all the smoke:

This was at the MK to Epcot monorail transfer.

Again, the fire has been extinguished, though the cause of the fire is still unknown.

Walt Disney World is known for treating their guests with the upmost respect and safety is their number one priority. Inside the Magic will keep you updated as this is a developing story.

Do you want to visit Walt Disney World Resort on your next family vacation to snatch up this Tatooine spirit jersey, but aren’t sure where to begin planning? Don’t hesitate to reach out to our trust-worthy friends over at the Authorized Disney Vacation Planners at Academy Travel for a free quote.

They will help you plan every aspect of your family vacation — From booking your resort reservation to booking dining reservations, even offering tips and tricks so you and your loved ones don’t miss out on any of the Disney magic.