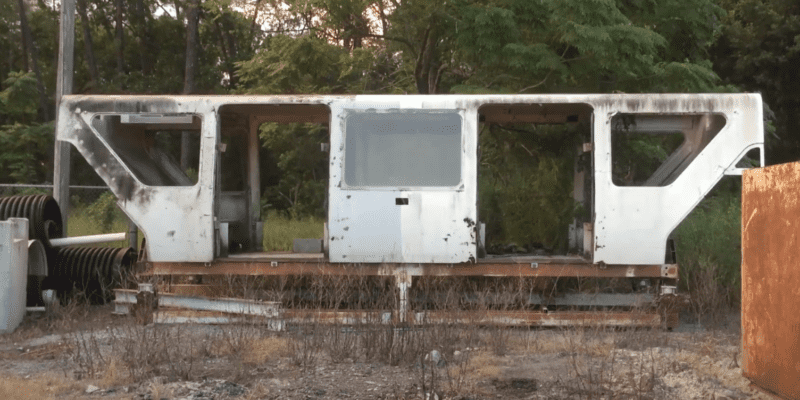 If you wondered what Walt Disney World Resort does with all of its scrap attraction pieces and theme park paraphilia, there is a special spot near Magic Kingdom where all of these iconic and magical pieces lay to rest.

As one may imagine, even for an intimate object, being able to live out your days at Disney seems like the dream as the Parks and Resorts are always so well-kept and stunning! Well, that is what the Guests can see, but there is much more than meets the eye. Walt Disney World basically has its own scrap yard where they place old attraction vehicles, props, garbage, and even a full-on monorail when they are not sure what else to do with it.

This area is just an open field and does not provide any of the items within it with protection from the Florida rain or heat, leaving most of these relics to rot and decay as they are continuously exposed to these natural conditions without being looked after. Although we may not be able to see this infamous junkyard, YouTubers Bay Lake Boys went to take a look and recorded their findings.

In the video, we can see an amazing assortment of Disney “junk,” which likely leaves many Disney fans wishing that they could own the scrap instead of watching it turn into trash over time. One of the most iconic aspects of the video is that we can see a full monorail in the yard. The monorail cart has been stripped of its doors, and the interior barely resembles the Disney transit vehicle that we know and love.

If we look on Google maps, however, it seems that Disney had now moved the monorail from the location it was in when Bay Lake Boys filmed this video in 2017. We can also see two Pirates of the Caribbean ride vehicles flipped upside down without covering, as well as a Haunted Mansion kiosk that was likely meant as a location to see food or merchandise themed to Madame Leota.

There are Tiki Room statues in view as well, which seems shocking as they are some of the items that do not yet look too far gone. We can also see what appears to be hundreds of Disney trash cans and the boats from Fantasmic! laying in the open. If you want to check out the video, you can below!

Speaking of abandoned items on Disney property, D23 has now announced that Walt Disney’s abandoned plane, will be restored and available for Guest viewing at the event! It seems that Walt Disney’s personal airplane, the Grumman G-159 Gulfstream 1, which Walt used to travel between Burbank and Orlando, is looking rather unattended to as well. Walt’s airplane currently sits in a service area north of Disney’s Animal Kingdom. The plane had remained covered for preservation, and D23 is getting ready to unveil it.

Disney has had a lot of abandoned items and locations on the property before, such as River Country, the abandoned Disney water park, and the second half of Disney’s Pop Century Resort which remained abandoned for years before becoming Disney’s Art of Animation Resort.

What do you think of these abandoned relics laying on Walt Disney World property? Let us know in the comments below!