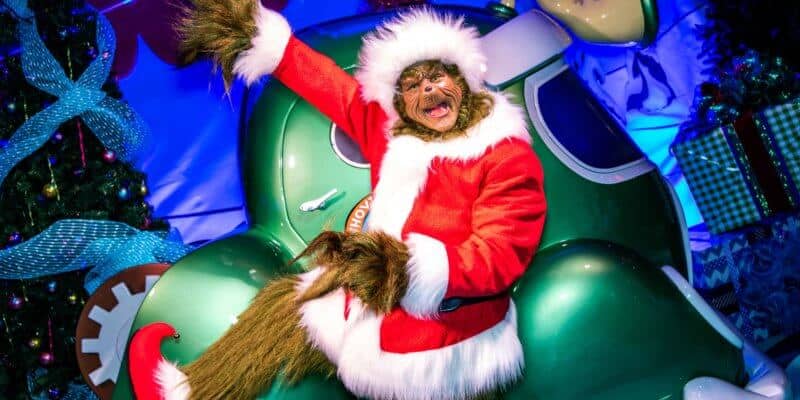 When Guests go to Walt Disney World, they may expect to see Mickey Mouse, Minnie Mouse, Pluto, Goofy, and princesses, and more, but one character they likely do not expect to see is The Grinch.

Considering that during the Christmas season across town, Universal Orlando Resort hosts Grinchmas in Seuss Landing, many Guests head over there when they want to say hello to the What who stole Christmas. Well, it seems that The Grinch might also be learning how to be an Orange County sheriff because he was seen outside Magic Kingdom, patrolling Guests as they walked by!

Brayden (@SirBrayden), creator and host of Mickey Views, was walking out of Magic Kingdom when he noticed a suspicious green fellow inside the sheriff’s car. If you check out the Tweet below, you can see that there sits The Grinch! Because the rest of the vehicle was so dark, and all we can see was the lit-up Grinch, we were unsure if the sheriff was in the car or not.

We got a suspicious individual out here! pic.twitter.com/1u2TlbYtnC

Regardless of the sheriff’s whereabouts, this was a very fun touch that this Orange Country sheriff put on their vehicle! Instead of just having multiple police vehicles at Magic Kingdom, which may cause concern for Guests, the sheriff found a fun way to incorporate the holidays, allowing Guests to feel protected and happy!

It should be noted that Disney will always have Orange Country sheriffs nearby, and if you see them, it does not mean anything is wrong! This is standard practice for the theme parks to ensure that, if ever needed, help is close by. Although you cannot see The Grinch this holiday season at Walt Disney World (again, you can at Islands of Adventure, or Universal Studios Hollywood), you can enjoy Disney Very Merriest After Hours event, which has been taking place on select evenings!

The event is separately ticketed but will allow Guests to enjoy fireworks, a parade, as well as a stage show to get them in the festive spirit. If you do want to check out The Grinch, we highly recommend you do so! TikTok has been blowing up videos of the mean one, with comments flooding each post of Guests who wish they too could say hello.

What do you think of this cop car Grinch appearance? Let us know in the comments below.

Comments Off on The Grinch Shocks Disney Guests, Found in Cop Car at Theme Park