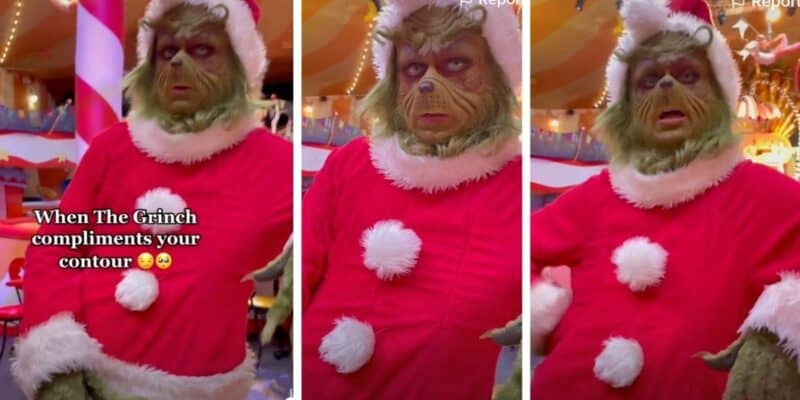 When Guests visit Universal Orlando Resort, they will now be enamored with the holidays. Now that there are lights strung up around Universal Studios Florida and Islands of Adventure, Guests cannot help but be tossed into the Christmas spirit.

Plus, there is so much to see and do around Universal when it comes to Christmas. The Wizarding World of Harry Potter is a holiday dream, and Universal’s Holiday Parade featuring Macy’s is a sight to see. One of the best aspects of Christmas at Universal, however, is Grinchmas.

Meeting The Grinch is an ultimate highlight for many, and now we can see that he is beloved by all. A recently, TikTok has gone viral, with Grinch fans freaking out about how good of a character The Grinch is at Universal. When we went to check out the Holiday Tour, we were able to meet The Grinch and decided to chat with him a little.

We took a video of our interaction and posted it online, and it instantly went viral! With millions of views already filling the video and hundreds of thousands of likes, The Grinch is bringing the TikTok community together. Viewers are enamored with his fantastic improv skills, vocal abilities, and the intricate details of his look.

Below, you can check out the video we took at the event! He hilariously commented on my contour, and we joked about having the same lashes. Of course, he had to tell me mine were fake, and his were real. The banter was excellent and was easily the highlight of my night. After posting the interaction, it was quick to see that many others love seeing The Grinch in his grumpy element!

The Grinch was crabby, but liked my makeup

The Grinch was crabby, but liked my makeup👏🏻 #fyp #foryourpage #thegrinch #christmas

If you are visiting Universal Orlando Resort this holiday season, and personally, I urge you to do so if you can, definitely be sure to say hello to The Grinch!

What do you think of this interaction with The Grinch? Let us know what you would want to ask him in the comments below!