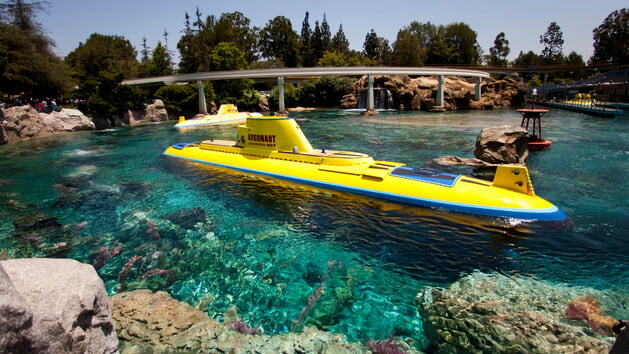 Looking across the sub lagoon is nice way to create some mental space for yourself when the park gets crowded.

Grab your scuba gear and take a tour of one of Disneyland’s wettest attractions.

Disneyland and all of the Disney Parks across the world are no strangers to water rides. Whether it be a trip to the Laughing Place with Br’er Fox and Br’er Rabbit on Splash Mountain, or a ride through the forest on the wild Kali River Rapids at Disney’s Animal Kingdom. None of these rides compare however to one 0f Disney’s most ambitious and unique attractions.

The original Submarine Voyage has gone through a few iterations, with the original Submarine Voyage ride opening back in 1959 when E-tickets were still a thing. Since then, it has gone through numerous amount of changes with it eventually becoming re-themed around Finding Nemo (2003). This ride has been closed since Disneyland closed due to COVID-19 and Disney has been working on it and refurbishing it in the meantime.

Recently Guests have been able to catch sneak peeks at what is being done to one of Disneyland’s most beloved attractions. Frederick Chambers (@HelmsmanFreddy) on Twitter uploaded a few pictures of the entire lagoon which was completely drained as well as all of the submarines laying idly by:

The Submarine Voyage refurb is coming along nicely. Those colors!!!! I’m working with a bartender at Trader Sam’s on some new secret menu drinks to celebrate the attraction. Keep your eye out this Thursday.

The Submarine Voyage refurb is coming along nicely. Those colors!!!!

I’m working with a bartender at Trader Sam’s on some new secret menu drinks to celebrate the attraction. Keep your eye out this Thursday. pic.twitter.com/6S76Mb8AiF

As we previously stated, the Submarine Voyage has undergone many changes and revamps with it at one point even featuring real-live mermaids! Not much has been said about the official reopening but The Finding Nemo Submarine Voyage has been advertised to come back this winter so our fingers are crossed!

Do you miss the classic Submarine Voyage ride at Disneyland? Are you excited for it to open back up?